Leaks cause damages, furnished apartment available for those affected 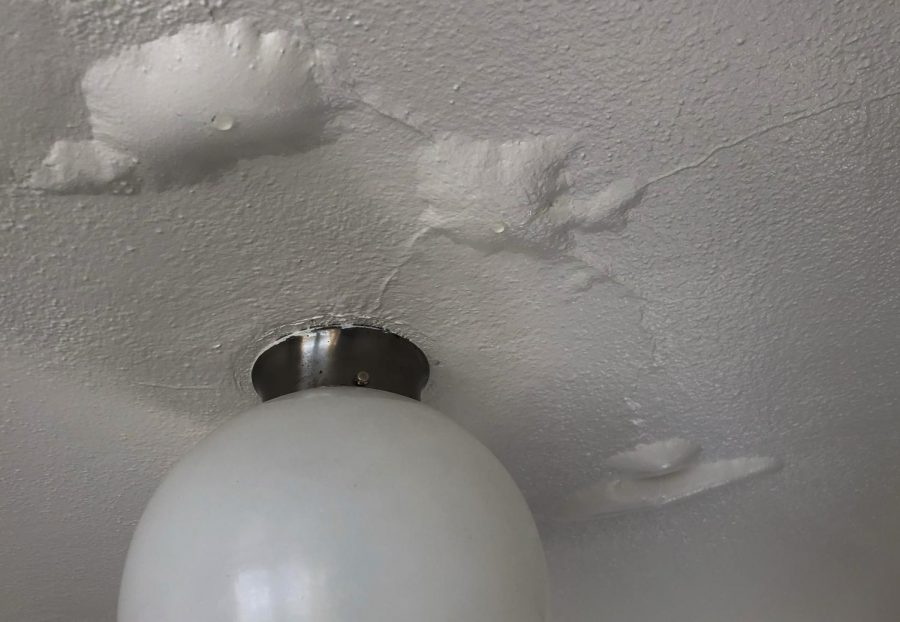 Waller Hall started experiencing issues with flooding Wednesday morning due to a leaking urinal valve. The leak had not stopped as of 5 p.m. Wednesday.

A flood that started Wednesday morning in Waller Hall was caused by a urinal that would not turn off in one of the bathrooms, said Phil Weiler, WSU vice president of marketing and communications.

“It appears that there was a valve that wasn’t working and caused the bowl to overflow and leaked onto the floor and wall,” Weiler said.

The first priority, he said, was to stop the water.

Additionally, the power was turned off to the few rooms that were affected so everything could dry out and the breaker would not short, Weiler said.

“We’ll evaluate in the morning the process of drying out the wall and ceiling,” he said.

Weiler said there is a furnished apartment made available for the people whose rooms were affected by the leak.

However, a student living in one of the affected rooms said he and his roommate were not made aware of the apartments. He said the third-floor urinal’s handle malfunctioned, so water was continually released.

The student, who lives on the second floor, said he stayed out of his room for the majority of the day once he realized what had happened.

He said they had to request more trash bins to catch the water leaking from the seven holes in the ceiling. The leaks were happening so fast they had to dump out the trash bins because they were filling up.

The leaks had slowed but had not stopped as of 5 p.m. Wednesday.

The rooms that were affected were the rooms located around the bathroom, the student said. Two of the three wings in the building were completely unaffected.

The janitor removed the plastic coverings from the light fixtures to drain the water from the leak, he said.

“There was also water coming out of the wall by our sink, directly above the sink’s mirror, which was significantly darker than the rest of the water,” he said.

The liquid was not all clear, but a “concerning” yellowish-brown. The student said the janitor would come by later to disinfect the room.

Colin Boyle, a freshman electrical engineering major, said a janitor came to his room at about 10 a.m. asking if there was any flooding, if the ceilings and floors were wet and if the lights were filled with water.

Boyle originally told the janitor the room didn’t have flooding before checking his roommate’s part of the room and he realized there was a small leak. He was given a bucket, he said, and by 5 p.m. the leak had stopped.

“[The flooding] didn’t surprise me because I know this hall has a lot of problems,” Boyle said.

He lives on the first floor where the flooding was not as bad as it was on the second floor, he said.

“I woke up this morning, and there was hot water dripping onto my face and then I realized the steam pipe was leaking,” freshman accounting major Skyler Stalin said.

The water came from condensation that had built up on the ceiling from the steam, he said.

His room filled with steam and Stalin said he was afraid that it was going to set off the fire alarm. Even though his fan was on and his window was open, the steam would not dissipate, he said.

An hour later when he got back from telling the front desk about the problem and going to class, he said, the steam in his room was gone.

The hallway outside his room had also gotten water in it from the leak, Stalin said.