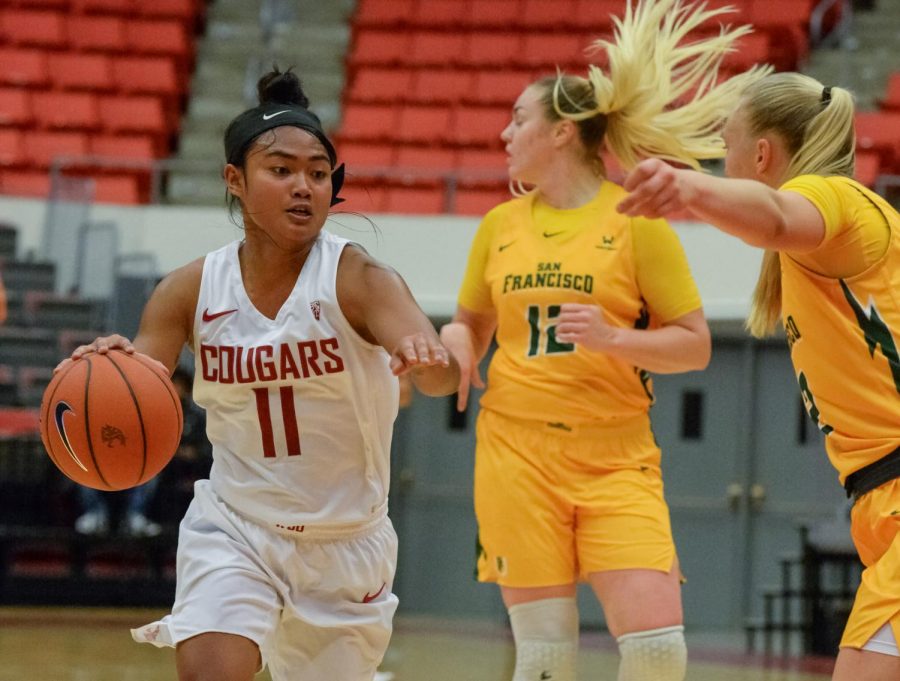 Junior guard Chanelle Molina runs in for a layup before getting fouled by San Francisco freshman guard Kia Vaalavirta on Nov. 29 at Beasley Coliseum. WSU will take on Gonzaga at 2 p.m. Sunday in Spokane.

WSU women’s basketball is heading to Spokane to face No. 24 Gonzaga on Sunday. This is the ninth-straight season the Cougars and Bulldogs have met and the 30th time in program history.

Head Coach Kamie Ethridge said that, when playing in Spokane, the team will see a vocal and hostile Gonzaga home court.

“That will be a real test to us because we really haven’t played in any kind of environment like that, certainly our younger players,” Ethridge said.

Gonzaga is coming off an upset win against No. 8 Stanford. Ethridge said the Bulldogs are a great challenge for WSU and to increase their chances of winning, the team needs to have four to five players score in double figures.

The Cougars put up some historic numbers in their latest win against Boise State; however, WSU made some mistakes that led to points for the Broncos.

“Those are the points we can’t leave out there,” Ethridge said. “We’ve got to finish easy shots.”

Ethridge said the team has struggled with consistency and sustaining effort, pace, intensity and urgency during the season.

“Gonzaga has really strong post players, so we’ve got to rebound because I think that sometimes can hold us back, especially offensively,” Hristova said. “I think that’s something we have to emphasize in the next couple of days and also just be consistent in our play. Like play hard and play together.”

WSU has lost to Gonzaga the past two years and the last time the Cougars beat the Bulldogs was during the 2015-16 season in Beasley Coliseum. Overall the Cougars are 20-9 against the Bulldogs.

Before facing Nebraska in November, Ethridge had not seen a strong leader emerging on the team yet, but after the Boise State game she said she thinks all the players want to lead. She said players are taking responsibility to show up and do what it takes to be successful including not being selfish and making sacrifices.

She said she hopes her players can look at the Boise State game to know what it takes to give themselves a chance to be successful.

“When we’re at our best, we’re sharing the basketball and making shots off the back ends of plays,” Ethridge said.

The Cougars will look to keep their win streak alive against the Bulldogs at 2 p.m. Sunday in Spokane at the McCarthey Athletic Center. The game can also be viewed at TheW.tv.