Team is also applying research as model for cancer in humans 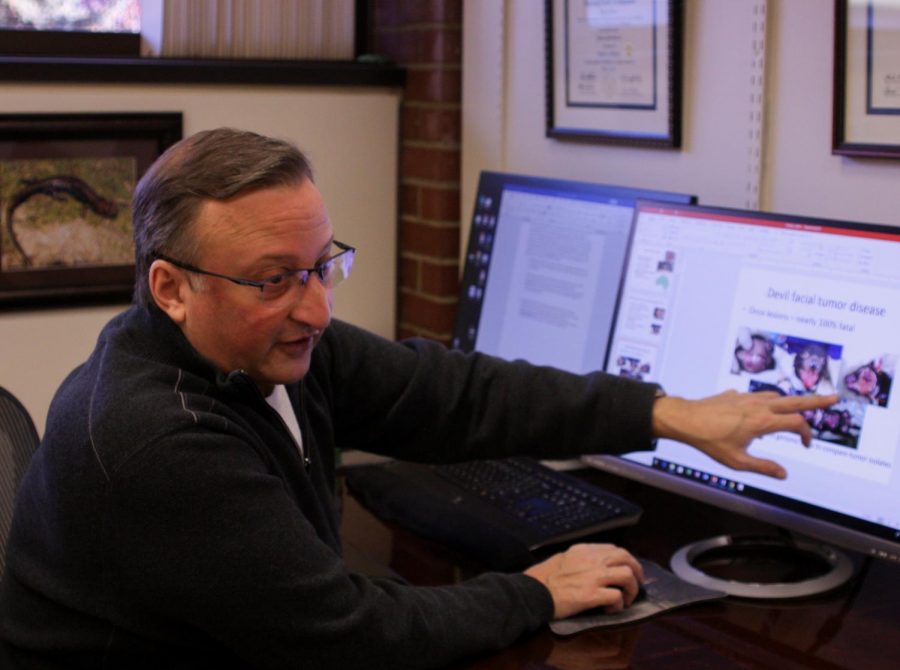 Andrew Storfer, an evolutionary geneticist and professor of biology, explains how Tasmanian devils can transmit cancer through bites and his involvement in studying them Thursday in Eastlick Hall.

A WSU researcher is leading a team studying the genes and other genetic variations behind the shrinking of contagious cancerous tumors in Tasmanian devils.

Andrew Storfer, an evolutionary geneticist and professor of biology, is working with an international team of researchers to investigate how some Tasmanian devil populations are evolving genetic resistance to devil facial tumor disease (DFTD).

Tasmanian devils are marsupials native to the island nation of Tasmania, Storfer said. They range between 20-30 pounds fully grown and are nocturnal animals with a unique voice.

“I call them like a small bear-dog,” he said.

He said they may bite and attack each other while mating or scavenging for food. This sometimes transmits DFTD, which is one of three known forms of transmissible cancers. There are two independently arisen tumors in the devils, while the other known transmissible cancer is in dogs.

“We believe the disease is not transmitted the way you would think, but rather from the devil being bitten to the biter,” Storfer said.

The tumor starts on the devil’s face and some of the time it migrates throughout the body, he said. DFTD is almost always fatal because it grows to the point where the devil will suffocates or is no longer be able to eat.

Since the cancer was first documented in 1996, Storfer said the disease has wiped out an estimated 80 percent of devils in Tasmania.

He said the researchers are now able to look at more tumor and devil data compared to a paper they published in Nature Communications in 2016. Currently they are looking at the entire genome instead of a set of markers across the genome.

“We compared a set of genomes from both tumors that did and did not regress as well as the devils that experienced tumor regression and did not experience it,” Storfer said.

He said what was interesting is that there were no nonsynonymous differences, or mutations that change which amino acid a protein is coding. This suggests that tumor regression is probably regulatory, meaning it has to do with how much of the gene is being expressed in the devil.

“We are exploring the tumor as a potential model for cancers in humans,” Storfer said.