Microplastic waste has potential to end up in soil, used in fertilizer 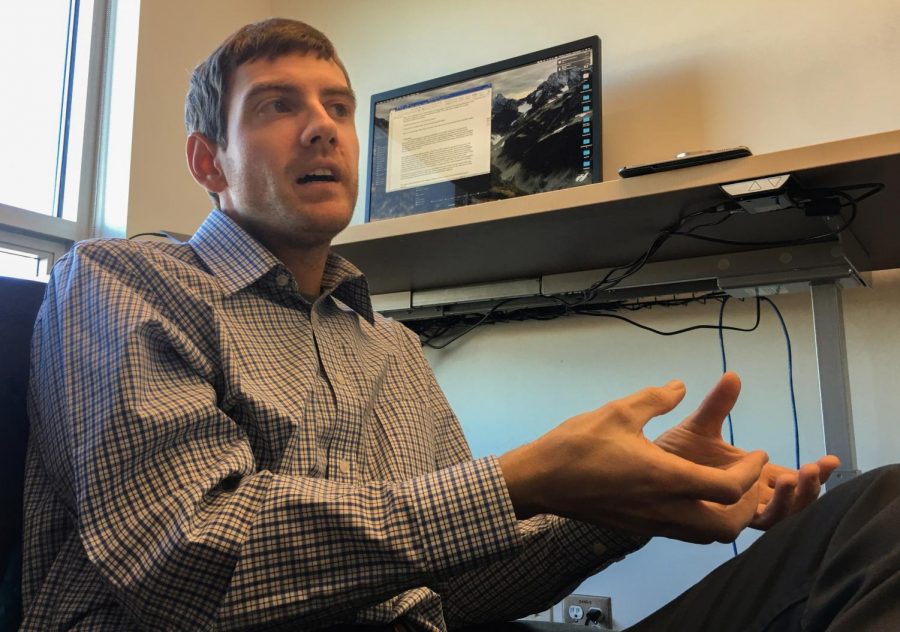 Nick Engdahl, assistant professor in the Department of Civil and Environmental Engineering, talks about the impact of microplastics on the environment.

A WSU professor is researching microplastic fibers’ movements and impact on the environment.

“This is stuff that strips off just from the friction of the intensity of the washing,” said Nick Engdahl, assistant professor in the Department of Civil and Environmental Engineering.

It is different from lint, he said. These fibers come off in the washing machine, and people do not see them because they end up in the wash water which goes to a wastewater treatment plant.

At the plant, flocculation occurs. Flocculation is a process where clumps are formed out of everything in waste water, called sludge. Fibers get into these clumps. However, some 5 to 10 percent of the fibers do not end up in the sludge and instead go straight through the plant, Engdahl said.

“What’s becoming more common, particularly in Europe, is this waste product of sludge, with a minimal amount of extra treatment, can be used as a fertilizer,” he said. “So potentially, that’s where we feel the real concern might be.”

Researchers do not know what impact the plastic has on the soil, Engdahl said.

“Intuitively, if you think ‘we’re going to dump a bunch of plastic in our soil,’ it just doesn’t seem like it’s a good idea,” he said. “Finding a lot of evidence to conclusively say that is a little bit harder.”

People use plastic mulch because there are advantages to it, but Engdahl said he does not think there could be advantages in the long term because the plastics break down.

He said some of the fibers go straight through the plant and do not end up in the sludge. Other researchers have been studying this and have not determined how much the microplastic fibers actually move once they are released into the environment.

“It’s a question of how far do they go,” Engdahl said. “Do they get stuck [on roots or grass]? Or are they on an express highway to the ocean?”

However, it is known that microplastic fibers have impacts on the ecosystem. If the fibers are ending up in wetlands, for example, fish will eat them, he said.

Engdahl modeled what happens when the microplastic fibers end up in the environment. Typically, when modeling solutes, the key thing is that it is dissolved in the water, he said.

The plastic fibers do not dissolve and they also do not move with the water. They will twist from all the pushing and pulling in the water, he said.

Engdahl said he had to find a way to model something that had a finite size.

“We have to do it as individual discrete objects and try to look at average rates of motion and things like that,” he said. “It could be that this is not the best way to do it, but it’s one way that works.”

Isolating the plastic is difficult, he said. It is hard to get plastic out of something like soil because it is made up of a mixture of soil grains, organic material and worms.

Even after the plastic has been isolated, it needs to be quantified, which would require an extremely precise balance, Engdahl said.

There is little data on how many plastic fibers there are in the environment, he said.

In the next year, Engdahl said he would like to create experiments in which fibers are moving through water. The researchers would determine the fibers’ trajectories in the water to see how they interact with things. Then, they will add roots or grasses into the domain so they can get the data needed to make predictions about what is happening in the environment.