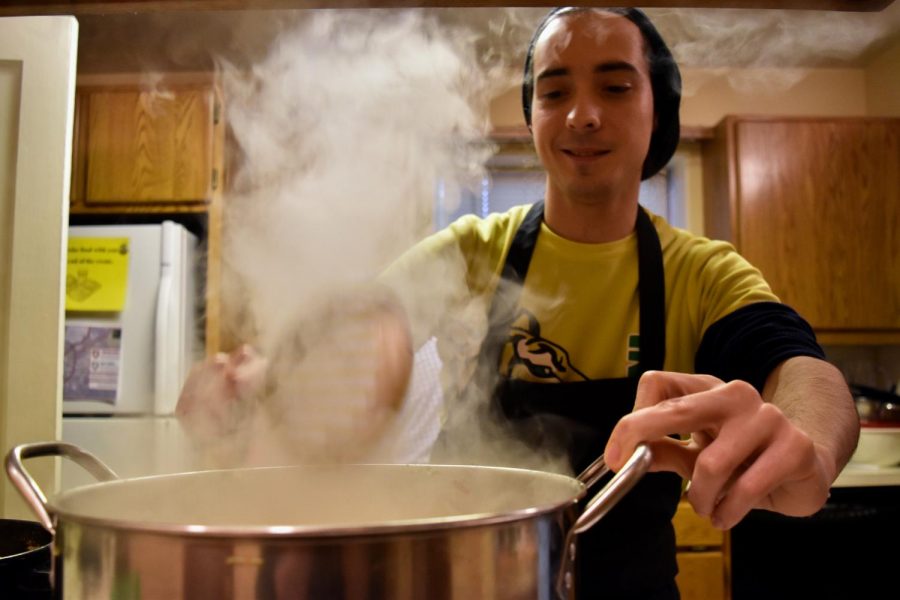 Kaufman, a fourth-year electronics major on exchange from Universidad Interamericana de Puerto Rico, Recinto de San German, “built a name for himself on campus” in only one semester in Pullman, MSS Director Manuel Acevedo said. Kaufman is known on campus not only for his food but also the “vida,” or life, he brings to everything, MSS Assistant Director Carlos Salazar said.

At Casa Latina Thursday afternoon, Kaufman made three authentic Puerto Rican dishes for people to stop by and enjoy. The main dish was arroz con pollo, or rice and chicken. Kaufman stewed the chicken with fresh herbs and other seasonings before cooking the rice with it.

The two side dishes were tostones de platanos fritos, or fried plantain disks, and ensalada de coditos, or macaroni salad. The plantain disks were fried once, squished and then fried again. Kaufman said frying starchy vegetables is very common in Caribbean cuisine. The macaroni salad was more savory than American macaroni salad and was full of chunks of cheese, spam and peppers. I was skeptical at first, but the food proved me wrong.

“I chose the dishes because they’re easy and they’re staples in Caribbean cuisine,” Kaufman said. “I picked the macaroni salad because it’s always what we’d have when we’d go to the beach, so it just remind[s] me of home. That’s what I wanted to share with everyone.”

Kaufman loaded up plates for friends who found themselves at Casa Latina and refused to let anyone leave without two plates of leftovers. His grandmother, Ana Madez, and many other Caribbean grandmothers would lovingly shout, “Come nene, que estas flaco,” which directly translates to “Eat baby, you’re too skinny.”

Kaufman graduated from Escuela Hotelera de San Juan in culinary arts in 2015 and shared some of the tips he learned there and throughout his culinary journey during meal prep. His No. 1 tip for someone who doesn’t cook at all is following a recipe and straying slightly while trying new things.

“When you’re doing creative cooking and cooking without a recipe, think of the kind of ingredients you’d find in the region that you’re cooking,” Kaufman said. “If I have sage I go American with stuffing and turkey, if I have rosemary I go Italian, if I have oregano I go Caribbean and cumin I go Mexican.”

Kaufman has a lot of experience in kitchens and it shows with the way he interacted with those of us helping him prepare the meal. He explained every step calmly and thoroughly and asked if we understood before moving on to another task. Nothing was frantic, even though cooking for several dozen people is a daunting task.

Few of his ingredients were name brands – many were generic or bulk versions. Kaufman estimated that he spent $10 for approximately 90 servings of macaroni salad.

“You don’t need great ingredients to make a great meal,” Kaufman said. “You just need to know how to use them.”