The man, the myth, the mustache

Minshew could lead WSU to the first 11 win season in program history to end a unexpected, but welcome year 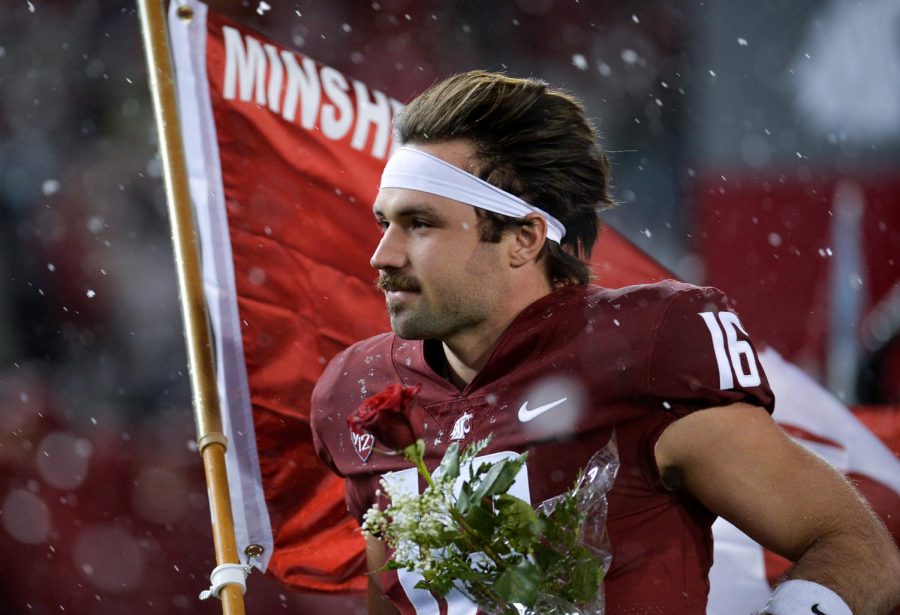 Quarterback Gardner Minshew II runs onto the field as part of senior night before the Apple Cup on Nov. 23 at Martin Stadium. Minshew will play his last game as a Cougar in the Valero Alamo Bowl on Dec. 28 in San Antonio, Texas.

From the start of the season, Gardner Minshew II stole the hearts of nearly all students and fans of Cougar football. As his final season playing college football comes to an end, the quarterback is grateful that his last year of college football was spent here in Pullman.

Starting in the summer, Minshew said he had to adjust to a new locker room and learn a new playbook with his new team, as he had played for three schools in his journeyman career. Making these adaptations and fighting for a starting position, he said the summer seemed to fly by.

Although the summer went fast, Minshew said from the beginning the team could tell they were destined for something special.

“I think when we got into camp and just started getting around to everybody, we could kind of tell we had the chance to be good,” Minshew said. “We believed in ourselves long before anybody else thought we’d do anything.”

Once he grabbed the starting quarterback spot, the rest of the season was an unexpected journey. From the very first game in Wyoming, Minshew and the team slowly started to find their rhythm as the pieces fell into place.

He helped lead the Cougars to a 10-2 overall record and a 7-2 conference record, their most successful season since 2003. Minshew easily made a name for himself in Pullman.

One game this season that stands out to him was the win against Oregon when ESPN College GameDay came to town. With the eyes of the college football world focused on Pullman, Minshew believes that is when people starting seeing the Cougars’ real talent.

“Just seeing how passionate our fans were and winning the game like we did, everyone storming the field, it was incredible,” he said. “I think that was really the point in our season where everybody else kind of caught up to thinking what we had believed the whole time.”

With some close games and breathtaking wins, there have been lots of highlights for WSU this year. The two games the team lost were the hardest moments of the season for Minshew, he said. However, suffering the first loss to USC early in the season was nothing compared to losing the Apple Cup in what was a snowy disaster, he said.

Going into the Apple Cup, the winner of the game had the chance to play in the Pac-12 Championship and possibly win the conference. The game was important to Minshew and his teammates as being Pac-12 champions was one of their goals prior to the start of the season.

Despite losing the Apple Cup, Minshew has a positive attitude about the season and will not let that one game define the team’s year.

“Definitely isn’t what we wanted, we wanted to win the Pac-12 and that’s what we set out to do but we have a lot to be proud of and we know that,” he said. “More than anything now we are just trying to win that 11th game and do something that’s never been done here.”

Throughout the season, Minshew led the nation in passing yards for the majority of the season and was on the Heisman Trophy watch list. However, he said his main goal was helping his team win as many games as they could.

Minshew’s father, Flint, has been to nearly every game this season and supported his son through the many wins and few losses. Throughout Minshew’s life, Flint said he has seen his humble personality in action and believes that he purely focuses on helping his team rather than flaunting himself.

“I think he is way more concerned with winning games and helping his team win games,” Flint said. “There’s times earlier in his career where he has thrown and set records for completions and yards yet didn’t win the game and he was just as upset.”

As Minshew is wrapping up his final and sole year at WSU, he said he thinks he did his job in leading his team and being a role model to others. By keeping a consistent attitude and instilling strong values of hard work, passion and excitement for the game, he feels that he is leaving WSU with all he had.

In Minshew’s eyes, one of the greatest qualities WSU has is its loyal fan base. He started a trend this season as his famous Mississippi Mustache caught the attention of Cougar fans all around, encouraging them to rep the mustache each and every game.

His father and family are extremely proud of the success and fun he had throughout his season as a Cougar. Flint said he believes there is no place that would suit Minshew better than here at WSU.

Between the fans, teammates and coaches, Minshew found the perfect home to finish his college career. As the team heads to San Antonio, Texas, for the Valero Alamo Bowl on Dec. 28, he said he wants to end his last game as a Cougar with a win and set a program record for wins.

Minshew looks forward to his final collegiate game and as his time at WSU is coming to an end, he believes the team and fan base has made his last season one to remember.

“More than anything I am just super grateful to just have the teammates that took me in like they did and kind of adopted me in such a short time,” Minshew said. “These coaches have believed in me and then the fans that just supported us every step of the way, they made it just so much fun.”