Cougs fall to No. 22 Gonzaga 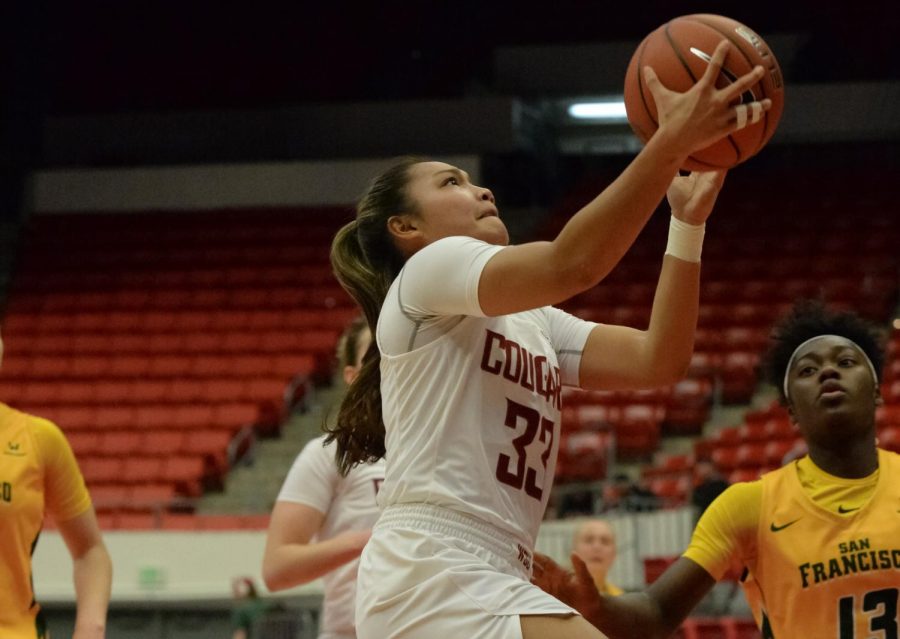 Freshman guard Cherilyn Molina runs up the court for a layup against San Francisco on Nov. 29 at Beasley Coliseum.

WSU women’s basketball lost to No. 22 Gonzaga 76-53 on Sunday afternoon in Spokane.

Head Coach Kamie Ethridge said the team struggled with staying disciplined in the first half which would have helped them be more successful.

“We kind of had a meltdown on how to play basketball,” Ethridge said. “So it’s a great challenge for us. What they do, they do it really well and we’ve got to either change or get beat.”

The Bulldogs scored first in the game but the Cougars responded, going up 4-2 with baskets from redshirt junior forward Borislava Hristova and senior center Maria Kostourkova. The Cougars controlled most of the first quarter and led by seven points with two and a half minutes to play. Gonzaga went on a late run to close the gap and trail 13-12 at the end of the first quarter.

Gonzaga took the lead against WSU in the second quarter by beating the Cougars to rebounds and scoring points off turnovers. However, the Cougars continued to fight and kept the game close. In the final minutes of the second quarter, senior guard Alexys Swedlund received a flagrant foul. Afterward, Gonzaga pulled away from WSU on a seven-point run to lead 34-24 at halftime.

The third quarter began with six missed shots, three form each team. With under six minutes to play in the third quarter, the Cougars were still looking for their first basket. As five minutes approached, Swedlund hit a three-pointer that ended a 15-point scoring run for the Bulldogs.

WSU’s efforts would not be enough to stop Gonzaga’s attack, however, as the Bulldogs extended their lead to 54-34 at the end of the third with a 12-2 scoring run.

In the fourth quarter, Gonzaga continued attacking and pulling away from WSU. The Cougars fought back and scored the final two points of the game, but the Bulldogs had done the damage winning the game 76-53.