Despite halftime tie, Cougars lose to Bobcats for first time since 1973 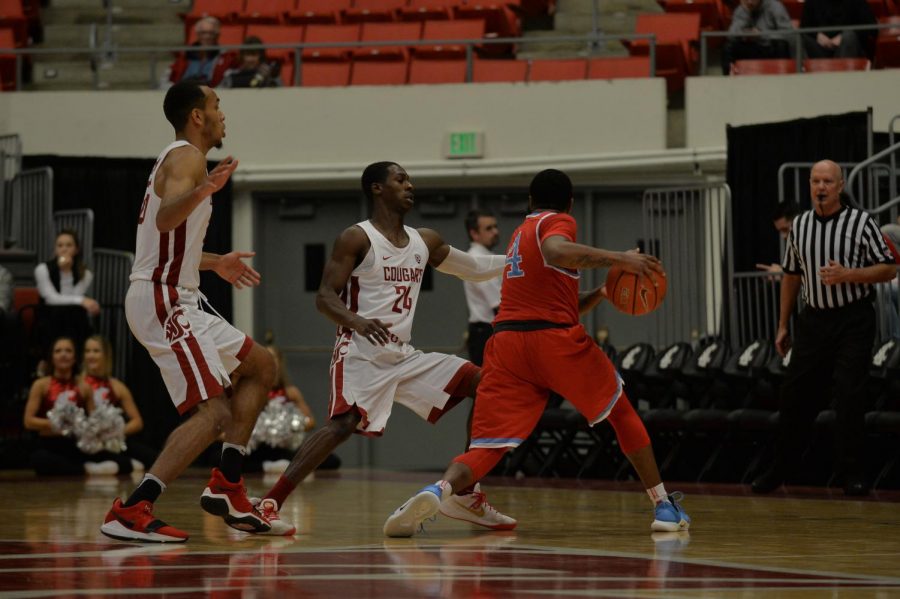 Senior guard Viont'e Daniels guards a player in the game against Delaware State on Nov. 24 in Beasley Coliseum. WSU managed to tie Montana State in the first half of Sunday’s game, but struggled in the second half and eventually lost 95-90.

WSU men’s basketball traveled to Kennewick, Washington, to face Montana State on Sunday, losing with a final score of 95-90. This was the Cougars’ third loss of the season, but they are still undefeated in Beasley Coliseum.

The Bobcats started the game out hot by nailing a three-pointer almost immediately after the tipoff. They continued this strong offensive momentum, making four more three-pointers and two free throws to extend the lead over WSU 17-6 about five minutes into first half.

The Cougars, who got off to a sluggish start with a turnover and several missed shots, would go on a two-minute scoring drought after senior forward Robert Franks Jr. made his first attempt. There was a lull in play over the next two minutes where both teams committed a turnover each and missed several shots.

MSU led by as much as 12 points in the first half, but WSU was not deterred as the team managed to get its stride going and bring the score within one point with about four minutes left in the half. Most of the scoring in the first half came from freshman forward CJ Elleby, Franks and junior guard Carter Skaggs.

MSU led for all but the last minute and a half when Skaggs sank a three-pointer to lift the Cougs over the Bobcats 40-38. After a few free throws and a layup from freshman forward Aljaz Kunc, MSU would put up one final three-pointer just seconds before halftime to tie the score at 43.

The second half started off in much the same way as the first for the Bobcats but a little better for the Cougars. While there were still plenty of missed shots shared by both teams, WSU couldn’t seem to find a way to take the lead away from the Bobcats.

WSU surged ahead for a brief moment in the middle of the second half, but MSU quickly made a few good shots to regain control at about the nine-minute mark. The Cougars went ice cold from beyond the arc at this point as they kept missing shots and turning the ball over.

These mistakes gave the Bobcats the break they were looking for to stretch their lead almost into the double digits with just under a minute to go. A big factor in the difference in scoring for both teams was their percentages from the field.

With this loss WSU’s record will move to 5-3 on the season as MSU moves to 3-6. WSU’s next game will be against the Rider Broncs at 7 p.m. Dec. 17 in Beasley Coliseum.