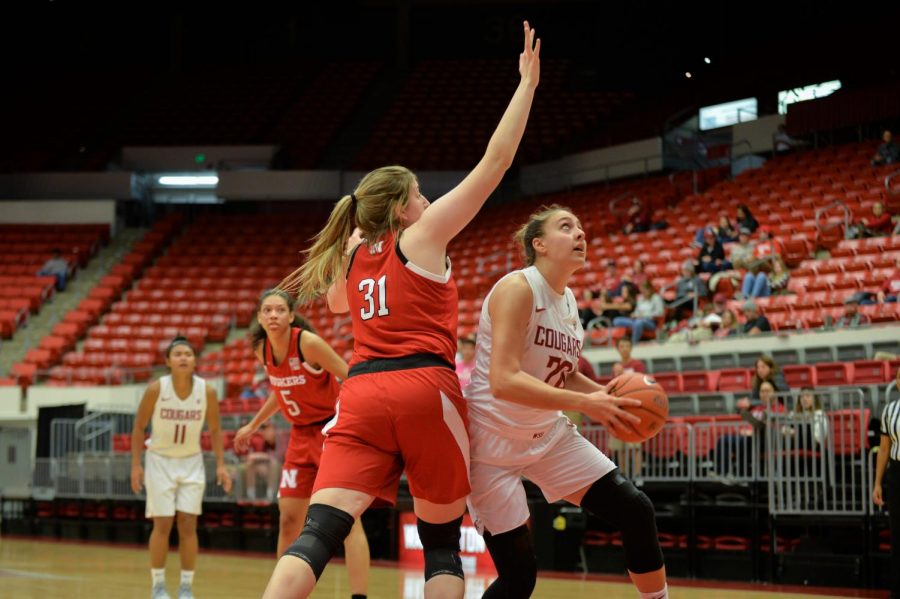 Senior center Maria Kostourkova looks for an opportunity to score a basket against the Nebraska Cornhuskers on Nov. 16 in Beasley Coliseum.

WSU women’s basketball lost to Kansas 71-63 Wednesday afternoon at the Duel in the Desert in Las Vegas, Nevada.

Head Coach Kamie Ethridge said the Cougars warmed up emotionless and started the game out sluggish.

“Well, I don’t think it’s a mystery,” Ethridge said. “I think one team came out and played confidently … and one team looked fragile and didn’t want the fight.”

Early in the first quarter, the Cougars committed five turnovers with their only points coming from freshman forward Shir Levy’s two free throws. The Jayhawks led 5-2 with under five minutes to play in the quarter. Senior center Maria Kostourkova made the first WSU field goal with 2:30 left to play.

Redshirt junior forward Borislava Hristova and freshman guard Cherilyn Molina had early foul trouble as they both picked up two fouls in the first quarter of play. WSU had 10 turnovers and only made two of its 13 shots in the quarter, causing the Cougars to trail 16-6.

However, the WSU attack would not phase Kansas as the Jayhawks quickly turned around and extended their lead to 15 points to go up 39-24 at halftime.

In the first minute of the third quarter, junior guard Chanelle Molina picked up her second personal foul. This meant four out of the five WSU starters had two personal fouls.

With under five minutes to play in the third, both teams had only scored six points but the Cougars continued to trail by 14 points as Kansas led 53-39 at the end of the quarter.

Kansas kept control of the game in the fourth quarter to defeat WSU by eight. Kansas’ largest lead of the game was 19 points with over three minutes to play in the game. Both teams struggled to maintain the ball as WSU finished with 22 turnovers while Kansas ended with 20.

WSU shot 44.1 percent from the field and only converted two of its 12 three-point attempts. Four Cougars scored in double digits as Chanelle led the team with 19 points followed by Hristova with 18 and Kostourkova who had a double-double with 11 points and 10 rebounds.

Ethridge said the team is still not playing with enough hunger and they have another chance Thursday to compete against another tough team.

“We’ve got to learn how to match some intensity and some enthusiasm to play, and we didn’t play with much enthusiasm [Wednesday],” Ethridge said. “When things get hard you got to want to compete and right now when things get hard for us we really shy away from the competitive side of the game.”

The Duel in the Desert continues for the Cougars as they will face Wichita State at 2:30 p.m. Thursday in Las Vegas, Nevada, in their last non-conference game of the season.