Cougars rack up 89 points as Franks, Elleby each score 18 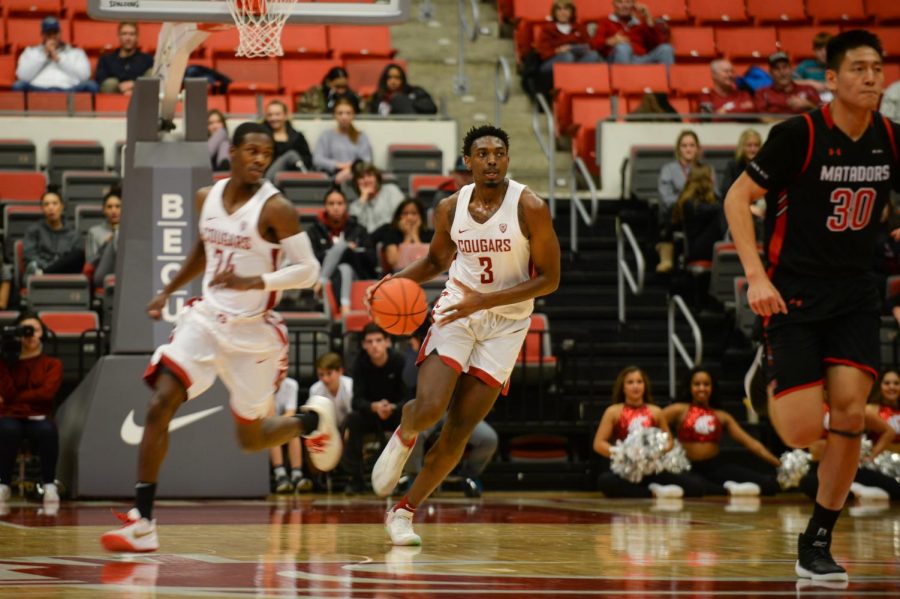 Senior forward Robert Franks dribbles down court as he looks to pass to junior point guard Ahmed Ali during the game against California State University Northridge on Nov. 27 at Beasley Coliseum.

In its last game in Pullman for the calendar year, WSU men’s basketball coasted to an 89-73 win over SIU-Edwardsville on Wednesday night.

Both teams came out firing shots right from the start. WSU found themselves struggling to knock down open shots early, but the Cougars (7-3) scored six points off three turnovers from SIUE (2-7) in the first five minutes.

WSU shared the ball exceptionally well which allowed the Cougars to go on a 10-0 run in just over a minute of play to take a 20-12 lead with 12 minutes remaining in the first half.

Senior forward Robert Franks failed to connect on four of his five shots in the first 10 minutes but was able to work the glass, picking up four rebounds.

Freshman forward CJ Elleby continued his tremendous year on both sides of the ball and was able to pick up 12 points, seven rebounds and three blocks early on. He would finish the night with 18 points.

SIUE lacked any sort of offensive rhythm and only scored two points off the Cougars four turnovers. But what offense they did have came from senior guard David McFarland who led the team with seven points with four minutes remaining in the half.

WSU did a tremendous job of protecting the paint, preventing SIUE from driving the lane and forcing them to take outside shots.

From the tipoff to the conclusion of the first half, WSU was in control of the game and they led 46-32 at halftime.

The start of the second half for the Cougars proved to be much different from the start of the game as they continued their offensive production from the end of the first half.

Franks, the nation’s eighth leading scorer, adjusted on offense after struggling in the first half. He attacked the paint instead of taking jump shots and would finish the night with 18 points.

McFarland and SIUE sophomore forward DJ Jackson continued to haunt WSU from the three-point line but they were just about the only bright spots for a team that has struggled on both sides of the ball all year.

With seven minutes remaining in the game, SIUE had a slight spark of offense to reduce a 21-point deficit to 15. They would also go on an 10-0 run with two minutes remaining, but ultimately they fell to WSU.

The Cougars head to Nevada to take on San Diego at 7 p.m. Saturday in the first round of the Las Vegas Classic. The game can also be seen live on Fox Sports 1.