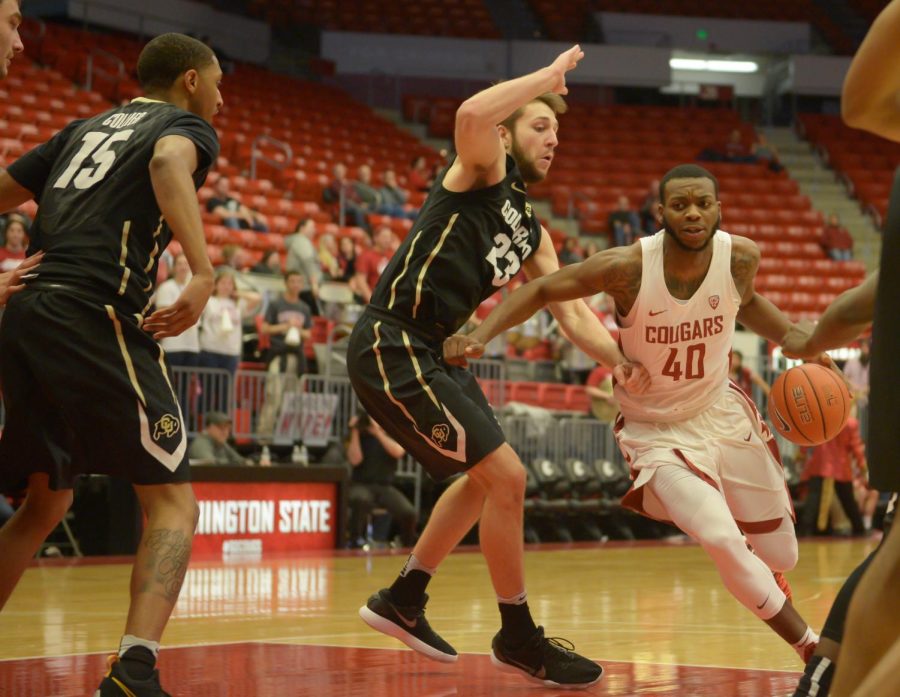 Then-junior guard Kwinton Hinson rushes towards the net past the Colorado defense on Feb. 19 at Beasley Coliseum.

A 16-3 run early in the second half ultimately proved to be too much as WSU men’s basketball fell to UW 85-67 Saturday night in its conference opener in Seattle.

WSU, on the other hand, is in the midst of a four-game losing streak after the defeat to UW. The Cougars hoped to start anew in 2019 since their last win against the Huskies in Seattle was just over two years ago on New Year’s Day in 2017.

Leading scorer Robert Franks missed his second straight game due to injury. The senior forward is averaging just over 22 points per game this season.

Head Coach Ernie Kent said the team wants Franks back but his absence has helped other players step up.

“We need him back and [Franks] knows that,” Kent said, “but right now we got to coach this team that we have and get them a little bit tougher physically and a little bit tougher mentally. The good thing about him being away is that other guys are starting to do that.”

The Huskies took an early lead thanks to senior guard David Crisp who scored eight points.

Without Franks, the attention was focused on freshman forward CJ Elleby who scored five points in the opening minutes of the contest.

UW led 24-13 with 11 minutes left in the first half, but the Cougars made six straight field goals to pull within four points. WSU closed the gap even more near the end of the first half but the offense went scoreless for just over three minutes giving the Huskies a 43-38 lead at halftime.

Elleby led the Cougs with 14 points in the first half while Crisp racked up 13 for the Huskies.

The 8,000 plus fans in Alaska Airlines Arena were silenced early in the second half as WSU started strong. For the first time in the game, the Cougars took the lead on a three-pointer by junior point guard Jervae Robinson.

The Huskies called a timeout and 30 seconds later took back the lead by a score of 47-46. UW went on a 16-3 run after the Cougars took a one-point lead and would not surrender the lead for the remainder of the game.

After a hot start to the second half, WSU went cold shooting 41.7 percent from the field in the final 20 minutes. The Huskies continued to pull away and ultimately won the game 85-67. Crisp finished with 23 points and Huskies sophomore guard Jaylen Nowell scored 20.

Elleby led WSU with a career high 26 points and 10 rebounds, his third double-double this season. Robinson was the only other Cougar to score in double digits, finishing with 14 points.

WSU is in the midst of a six-game stretch away from home and Kent said it hasn’t been easy.

“It’s very physically demanding on your body to do that and we’re in a four-game stretch of losing, all of them being away from Beasley [Coliseum],” Kent said. “We’ve got to weather it … there’s a lot of basketball left.”

WSU hopes to end its four-game losing streak when they face Colorado 6 p.m. Thursday in Boulder. The game can also be seen live on Pac-12 Networks.