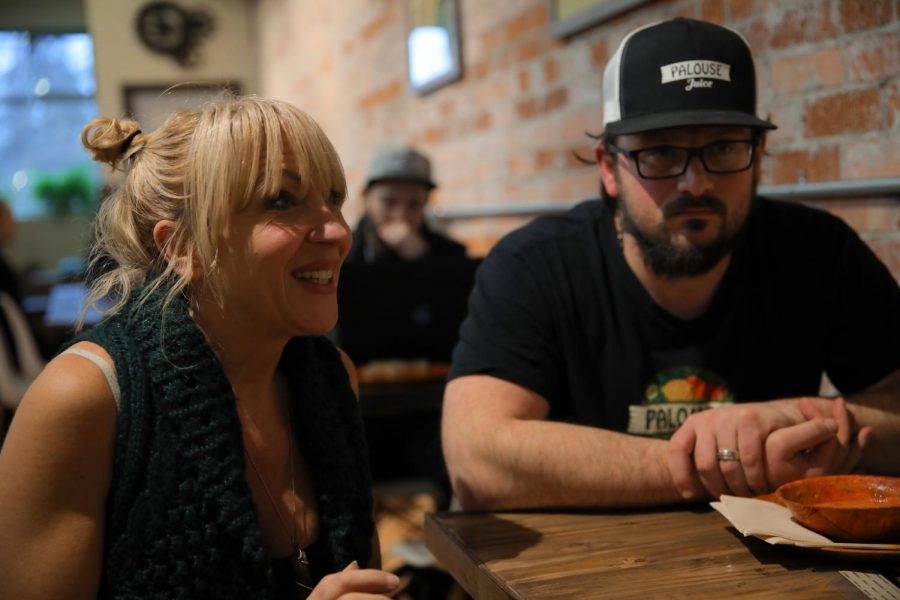 Toni Salerno-Baird, left, and Zach Salerno-Baird discuss how they invest in their customers by providing a higher quality product Tuesday at Palouse Juice’s anniversary party in Moscow.

Palouse Juice celebrated their one year anniversary on Tuesday and encouraged each customer to enter raffles and win various prizes. The shop gave all proceeds they earned during the event directly to a local non-profit that specializes in environmental hazards.

Toni and Zach Salerno-Baird are husband and wife. They share responsibilities not only as a couple, but as owners and managers of Palouse Juice.

Toni said more than the smoothies or the juice, customers look for people who will care about them.

“You wouldn’t believe the number of people we’ve impacted,” Toni said. “People are looking for something else. They want to be heard and they want to live stress-free.”

Since opening, Toni said she acknowledges running her business would not make her get rich quick. Thoughts of making her cups non-compostable may slip into her mind, but she has never allowed herself to compromise the quality of her product.

But the two owners are not reluctant to change. Toni said she studies nutrition every day to see new developments and discover how she can improve her ingredients and recipes.

“I learned that canola oil was linked to Alzheimer’s,” Toni said. “I was like, ‘Oh my gosh, I can’t give this to my customers.’ So, we got rid of that, and so we started to make our salad dressing from scratch, using avocado and olive oil.”

Toni said she looks forward to what the future may bring, and already has big plans for Palouse Juice moving into 2019.

“We’re really working on getting some grants together,” Toni said. “We can work on a commercial garden, so we can grow our own fruits and vegetables. Then, it’s really farm-to-table.”

Zach said he handles the business aspects of the juice bar. He is thankful for the people who support the couple’s dream.

“This place is very rich with community and the diversity of the colleges,” Zach said. “You couldn’t ask for such a utopia out in the middle of nowhere.”

Years ago, when he was a bachelor, Zach said he used to indulge in fast food for at least one meal each day. He was working on-the-go and wanted to eat cheap, but after Toni introduced him to eating clean, chemical-free food, everything changed.

“I just shedded weight, like 30, 40 pounds,” Zach said. “I know I am going to make myself sound like a fattie boombalottie, but I’m not. You know, it was crazy, not working out, nothing — just eating right.”

As the night continued, Palouse Juice welcomed back Natalie Greenfield who performed live music for all the patrons who have supported Toni and Zach’s business throughout the first year.

The approach that Toni and Zach take produces numerous regular customers. Toni said sorority girls from the University of Idaho and WSU have become so familiar with her that they started to call her ‘Mamma T.’ She said she sees herself as their parent away from home.

“There is power in what you eat, what you think, and what you feel,” Toni said. “If you put those three together you can live a happy and fulfilling life.”