Fight to the top 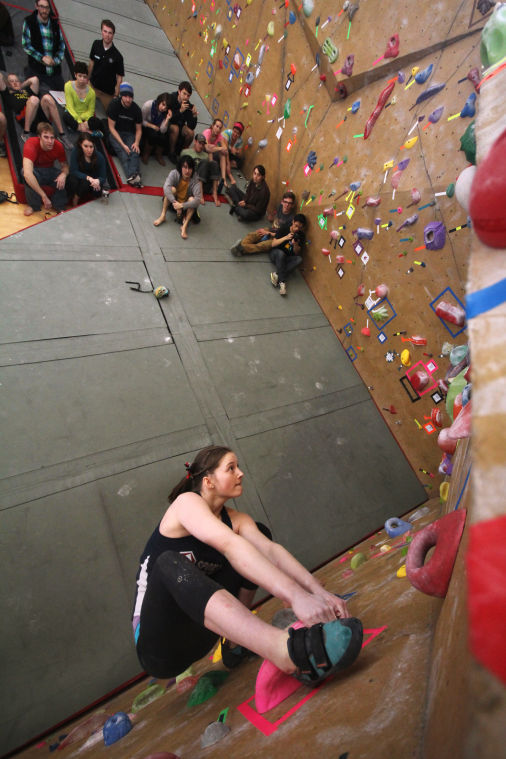 Cierra Graham examines her next move on the route.

From experts to beginners, rock climbers of all abilities gathered for the 13th Annual Bouldering Competition yesterday.

The event, sponsored by the Student Recreation Center, had a turnout of 36 competitors.

The competition went from 10 a.m. until 4 p.m. and was divided into different categories for beginners, intermediate, and advanced climbers, with separate groupings for men and women.

“It’s just a climbing festivity so everyone can come together and show off their skills,” said climbing wall supervisor Ava King.

The winner for each category was chosen by the climber’s five best scores. The participant had to complete the route in order to be scored. Each route on the wall had a point system that reflected their difficulty; some of the routes were only worth 25 points while the hardest route was worth 525 points.

“It’s a great feeling when you complete the route,” said King.

The three men and women with the highest scores in the advanced category faced off and competed against each other. The winners were awarded prizes, like gear donated by the SRC and Hyperspud Sports in Moscow, Idaho.

The goal of the event was to bring together the climbing community and introduce new climbers to the sport. This competition provided an opportunity to give a different bouldering experience to climbers. The SRC also wanted to get the word out about the climbing wall and encourage anyone to come check it out.

“We wanted to gather the climbing community and let them have a fun time getting to know each other,” said Marc Wai, the lead route setter.

Wai described many benefits to climbing, both mental and physical. These included conquering a fear of heights, working on successful communication, and stress relief. Climbing does not necessarily require great amounts of physical strength, he said.

“If you feel you are not physically well off, climbing is something that caters to the master,” said Wai.

Jennifer Kersh, a competitor at the event, said she’s been climbing for less than a year and wanted to check out the event. She said that the sport is not as hard as some people may think.

“Just come and have a fun time with friends,” said Kersh

Wai was pleased with the turnout at the event. Everyone seemed really excited and pleased with the event, he said. He said he was happy that everyone was cruising through the routes because he wants climbers to walk away with a positive experience.

“I hope that they feel good and proud that they are competing against some of the best climbers in Pullman,” Wai said.

The climbing wall is open every week and is free to students. Students can also check out equipment at the front desk for free. No experience is needed to climb the wall and supervisors are always there to help people if needed.