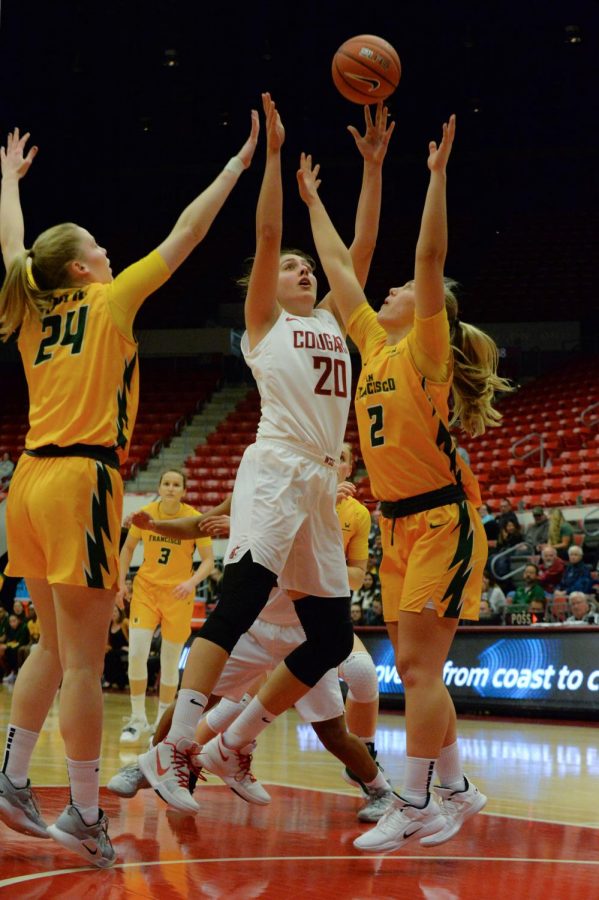 WSU women’s basketball will play in front of its home crowd for the first time since Dec. 1 when they host Utah on Friday night.

The Cougars (6-8, 1-2) return to Beasley Coliseum after a six-game road trip where the team went 3-3. Head Coach Kamie Ethridge said the team had to reintroduce themselves to their home environment.

“It is unbelievable that it has been so long since our last game here,” Ethridge said. “The team is super excited to be back.”

Ethridge said she is looking forward to coaching in front of the drumline, band and cheerleaders, and getting a positive energy going in the arena again.

WSU started conference play with a three-point victory against UW on Dec. 30, a tough loss to then No. 11 Oregon State last Friday and a 40-point defeat to No. 5 Oregon on Sunday.

Ethridge said she saw a mix of good and bad from her team over the past two games. From playing toe-to-toe with the Beavers and having a chance to win to playing as the worst version of themselves against the Ducks.

She said the Cougars need to improve their focus to avoid playing inconsistently.

“You see what happens when you don’t show up mentally and emotionally,” Ethridge said. “More than anything it affects your physical play.”

She said when WSU walked away from those two games, they reevaluated who they were going to be on game days. She expects them to be ready for the Utes.

Ethridge said Utah is coming in with a lot of confidence and the Cougars match up pretty well with them, but that doesn’t mean the team can just expect to show up and win.

Senior forward Megan Huff leads the Utes, averaging just under 20 points and 10 rebounds a game. Ethridge said the Cougars will need to slow down Huff if they want to secure a victory over one of the top teams in the conference.

“We get another chance to play a really good team and see where we stand,” Ethridge said.

After playing Utah, WSU will host Colorado (10-4, 0-3) on Sunday. The Buffaloes are winless in conference play through three games and will be hungry for their first Pac-12 victory this season.

Colorado is led by senior guard Kennedy Leonard who is averaging just over 14 points and seven assists per contest.

The Cougars will take on Utah at 7 p.m. tonight and the Buffaloes at noon Sunday. Both games will be played at Beasley Coliseum and can be seen on Pac-12 Networks.