Tennis returns home to compete in pair of matches 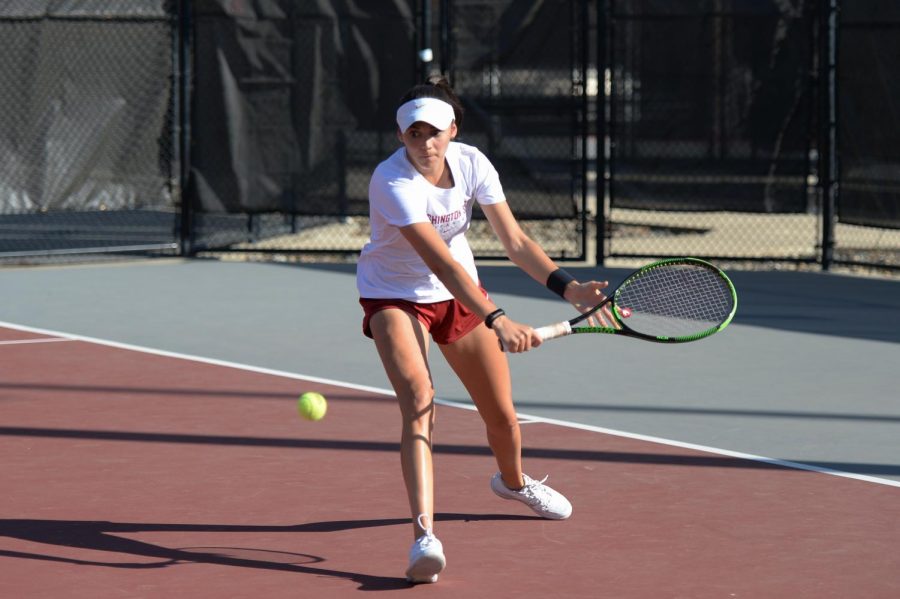 Junior Melisa Ates prepares to return the ball during a practice Sept. 19 at the WSU Outdoor Tennis Courts.

WSU tennis will come home for the first time this spring season when they play against a pair of teams Saturday.

The Cougars will compete against rival University of Idaho first before taking on Eastern Washington University later in the day.

WSU is coming off a successful showing at the Rainbow Wahine Invitational this past weekend in Honolulu, Hawaii, where the team went 18-4 in singles and 6-6 in doubles matches.

Head Coach Lisa Hart said her players will be ready for the Vandals and Eagles despite playing in the grueling three-day invitational.

“I think they do such a good job with their time managing skills so I think they’ve done a good job getting rest,” Hart said. “I think they all have the matches on the forefront of their minds and I think everyone’s excited.”

This is the start of the dual match season for the Cougars where the team competes against a pair of schools on the same day.

Junior Ege Tomey said WSU can’t wait to get on the court and play in front of the home crowd.

“We all feel like we’re ready to play … we can’t wait to start winning,” Tomey said. “It feels great to be back and we can’t wait.”

The Cougars shut out the Vandals and Eagles last season, winning all of the singles and doubles matches against the two teams.

Hart said the team has been looking forward to this weekend for nearly nine months.

“We’ve been kind of waiting for this dual match season ever since we were done last April,” Hart said, “so we’re excited it’s finally here.”

The Cougars will first face Idaho at noon and then EWU at 5 p.m. Saturday in the Hollingbery Fieldhouse.