Cougars drop only one set in 12 singles matches against Idaho, EWU 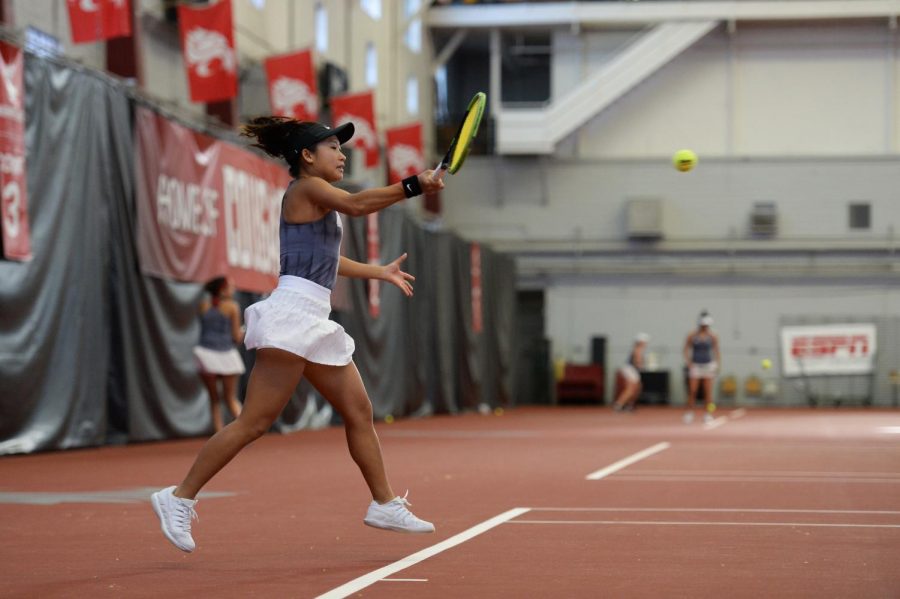 WSU freshman Savanna Ly-Nguyen prepares to return a ball during her singles match against Idaho’s Anna Stefani on Saturday at Hollingbery Fieldhouse. Ly-Nguyen won the match in straight sets.

In the air-conditioned Hollingbery Fieldhouse, Cougar tennis had no trouble turning up the heat during a pair of matches Saturday as they swept both Idaho and Eastern Washington 7-0.

Head Coach Lisa Hart was proud of her team’s performance and is looking forward to the remainder of the season.

“Really excited about the way they performed tonight,” Hart said. “The dual match season is kind of like the team format of it all. It really excites this particular group.”

The Cougars faced the Vandals as fans from both states showed up to support their team. After the free Cougar flags were handed out and the referees popped open the tennis ball containers, the schools were underway.

WSU didn’t allow the Vandals to win a set in five of six singles matches. The only match that went beyond two sets was Sato’s matchup with Idaho senior Maria Tavares.

The two players had an exhausting and daunting battle that took every last breath. Sato lost the first set 7-5 but won the second set 7-5 and claimed the decisive tiebreaker 10-4.

The Cougars shut out Idaho and claimed a 7-0 victory over the Vandals for the second year in a row.

WSU had about an hour of rest before the Eagles soared in to start their matches.

The doubles point went to the Cougars for the second time on the day as Bayerlova and Miksovska won their match and freshman Yang Lee and junior Melisa Ates defeated their opponents 6-2.

In singles play, the Cougars completed their second sweep of the day by claiming all six matches. This is the fourth straight year WSU has shut out the Eagles.

WSU will now hit the road for over a month with the first stop being in Missoula where the team will compete against Montana 9 a.m. and 2 p.m. Friday and Michigan State at 8 a.m. Sunday.