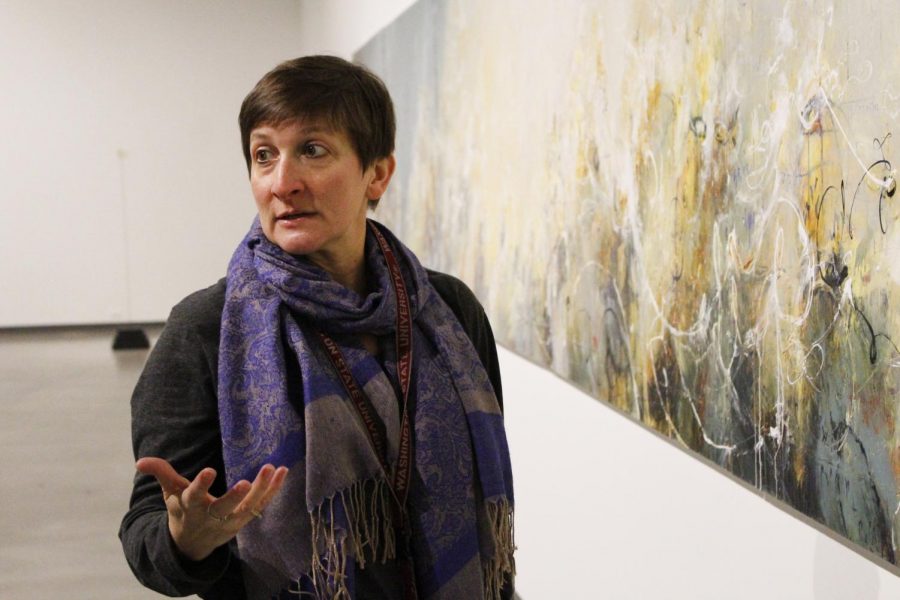 A new art exhibition featuring the work of economist and artist Michael Schultheis will be available for the public in the Jordan Schnitzer Museum of Art from Jan. 15 to June 29.

“Never before has there been true geometry in art,” Schultheis said.

Any artistic rendering of a circle, he said, is not a circle because it is a physical approximation of it.

The equation of a circle – pi is equal to the circumference over diameter – is a true circle, he said. It shows a circle more accurately than when it is drawn.

Schultheis said he works out the equations on the canvas and draws the shape that correlates with the equation.

He has crafted sculptures, some of which are in the exhibition, based off geometric forms in the paintings, Shannon said.

“It’s like I’ve reached into a painting and pulled out the geometry and now cast them in bronze,” Schultheis said.

The museum curator, Ryan Hardesty, changed the lighting to show the sculpture’s shadows cast onto the floor and the wall, Shannon said.

Mathematical equations can change over time because they involve variables, so a geometric shape, like a circle, can increase or decrease in size, Schultheis said.

As the painting shows the story, the geometric shapes are changing and moving, he said.

“It’s not just geometry and boring calculus,” he said. “We can tell extraordinary stories in the geometry…I’m doing portraitures of the interior, of one’s psychology.”

For example, Schultheis said, a limaçon is a shape that has both an interior, which can increase or decrease in size, and exterior loop, he said.

This is a metaphor for how people can increase their interior consciousness, an idea taken from Carl Jung, a Swiss psychoanalyst, who created the concept of the continuum of consciousness, Schultheis said.

“Math [is a language that] connects everything,” he said. “It’s the ideal interdisciplinary connection.”

One of the works shown in the exhibition, Water Lilies of Archimedes, is an homage to Claude Monet. The painting was inspired by six of Schultheis’ favorite artists, he said.

“I take imagery from their work that art students know and use it to teach them the basic tenets of calculus,” Schultheis said.

One of the basic principles shown in the piece is the concept of dividing things into smaller and smaller pieces indefinitely, he said. Archimedes, a Greek mathematician, came up with this idea.

The average person may just see an abstract piece of work, but a music student may see the circle of fifths in his art, he said.

An art student will see geometric figures, like a dodecagon, in his art, Schultheis said. A math student can see the same dodecagon but may also realize it shows one of Archimedes’ theory. His works can also teach math students art history, he said.

There is an aspect of history included in his work, Schultheis was inspired by past mathematicians, philosophers and artists, he said.

In his opening reception, Schultheis will talk about his influences and other topics on Jan. 24 from 4:30 to 6:30 p.m. Schultheis’ cello teacher will play music he created based off of Schultheis’ work, Shannon said.