Visual lecturer explores ugly past, explains how issues can change 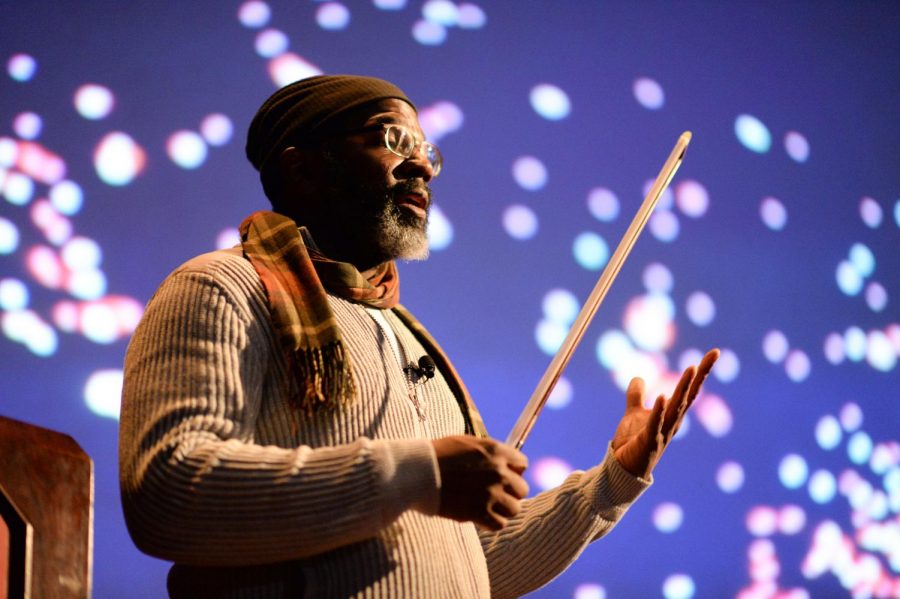 Visual artist and musician Paul Rucker discusses United States prison demographics during his lecture "Normalization" held Monday evening in the CUB auditorium. Each dot behind him represents a prison currently active in the United States.

An activist, musician and artist, Rucker creates multimedia and fine arts projects to address issues of mass incarceration. But to do that, he said, first you have to go back in history.

As one of his projects, Rucker animated data pinpointing hundreds of prisons built in the United States. They pop up continuously over the course of about a minute. Green and orange and yellow dots until a sea of brightly colored bubbles fills the map behind him.

The United States, Rucker told the audience, has about five percent of the world’s population, and nearly a quarter of the world’s prisoners. Those high rates of imprisonment are tied directly to the nation’s history of slavery, he said.

In one of Rucker’s pieces, a charred piece of wood, with the signature f-holes of his cello, was made in remembrance of Jesse Washington, who was lynched and burned in 1916.

In another, a series of boxes would whistle every 67 minutes. That was the time it took a jury to acquit the murderers of the 14-year-old lynching victim Emmett Till after a white woman accused him of whistling at her.

“They don’t whistle anymore,” Rucker said. “The woman that accused him admitted she made it all up.”

In one of his most jarring pieces, Rucker animated a historical “lynching postcard” to the tune of cello music. The body, a colorized sketch of the real thing, sways in the breeze under a tree. White families and children look on.

The images are often offensive to his audience, Rucker said, but ignoring bad things make them get worse.

“If you, as an artist, worry about offending someone in the process of bringing awareness to something, you’re never going to accomplish anything,” he said. “Never apologize.”

Some of Rucker’s artwork focuses on modern subjects. In part of a series, Rucker paid homage to an unarmed Cleveland couple that was shot by police in 2012.

The couple’s car backfired near a police station and officers thought they were being shot at. Pursued by 11 police cars, the couple was shot 137 times.

For the project, he brought a gun and shot pieces of paper for each time the couple was shot.

He did the same for other victims of police violence, including Oscar Grant, Eleanor Bumpurs and Sean Bell.

One audience member told Rucker in the question and answer session of the talk that he was excited by the artwork because, “it forces people to talk.”

“I think it’s really important to have talks about difficult things,” Rucker said. “There’s never been a truth and recognition about the impact of slavery.”