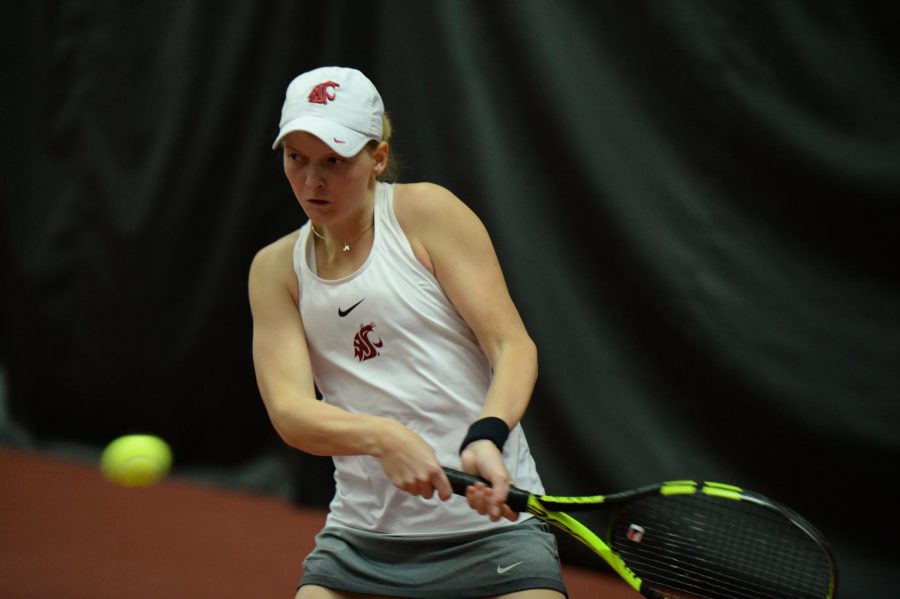 Sophomore Michaela Bayerlova returns a ball during a match Saturday at the Hollingbery Fieldhouse.

After sweeping a pair of teams at home this past weekend, WSU tennis will hit the road for over a month.

The start of the new year brought the Cougars 7-0 victories over Idaho and Eastern Washington on Saturday as the team kicked off their season in dominating fashion.

Now WSU’s stamina and appetite for victory will be tested on the road against numerous teams, starting with two waiting for them in Montana this weekend.

Head Coach Lisa Hart seemed confident in her players’ ability to manage matches away from home.

“It’s always a little bit uncomfortable on the road,” Hart said. “But if you look at our schedule, we’re going to have to figure out how to win on the road this year, so we might as well get started.”

Among the curving mountains and long stretches of flat lands, the town of Missoula will host the Cougars (2-0) for three dual matches.

The games will take place at the Peak Racquet Club indoor tennis courts, with the Cougars first stringing up their rackets against Montana on Friday for two dual matches.

The Grizzlies are the third consecutive team from the Big Sky Conference WSU has faced. The two teams met last year and the Cougars walked out of Missoula with a pair of 7-0 dual matches victories over Montana.

This match may be just what WSU needs as the Grizzlies haven’t played since the end of their fall season in October. Meanwhile, WSU is already in the swing of things, competing in two dual matches and the Rainbow Wahine Invitational in Hawaii this month.

WSU will face Big Ten Conference opponent Michigan State on Sunday. This is the Cougs first of three scheduled matches against Big Ten schools this season.

The Spartans haven’t taken the court competitively since the Harvard Invitational in early November. MSU will take on the Cougars first and rest up before facing Montana later in the day.

“We’re excited,” Hart said. “We need to get by Montana first and then we’ll get a chance at a Big Ten school. [Michigan State] finished about 10 spots below us last year so they’re a pretty good program.”

The Cougars will face the Grizzlies at 9 a.m. and 2 p.m. Friday before battling the Spartans at 8 a.m. Sunday.