WSU men’s basketball CJ Elleby has become a key player on the court, his passion leads to his success 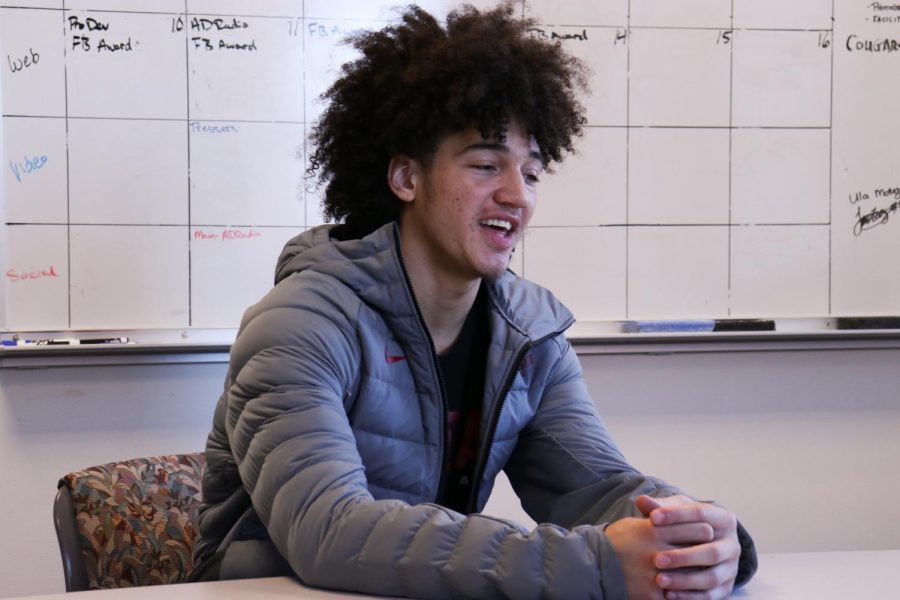 WSU freshman basketball player CJ Elleby discusses how his family supported his committment to WSU on Monday in Bohler.

Since he was in a stroller, CJ Elleby has been near a basketball court.The freshman forward has only been in Pullman for a few months, but his family history and experience in the sport has made him a dangerous threat this season.

CJ stepped on the court at a young age. His father, Bill Elleby, played collegiate basketball and coached CJ growing up.

“I’m just from an athletic family,” CJ said. “Since I was young, I have played basketball. I mean, they have stories about me playing basketball when I was 2, just with the ball in my hand.”

CJ grew up playing multiple sports competitively with his older sister and two younger brothers. However, he could tell one sport was going to be a big part of his life — basketball.

“Growing up, we were competitive with each other and that kind of pushed me and gave me that edge,” CJ said. “I was always around them, I never got away from them. ”

Throughout his life, CJ said he followed his father as a role model. CJ has always been inspired by Bill’s collegiate success and he said his father pushed him to be the player he is today.

Bill began his basketball career in 1988 when he committed to University of California, Berkeley. He remained at Cal until 1992 and during his collegiate career, Bill started his sophomore through senior year.

Bill said from an early age he could tell CJ would excel in whichever sport he put his mind to.

“He had a lot of natural talent and natural ability,” Bill said. “He was just really exceptional at an early age on the basketball court.”

CJ earned four varsity letters at Cleveland High School in Seattle under coach Jerry Petty, who he’s known most of his life.

Haskins has seen CJ grow and develop as a leader on the court over the years.

“I’ve watched him since he was probably in the fourth or fifth grade,” Haskins said. “I just love him because he plays the game with passion and an extreme amount of toughness.”

When it came time to choose a college, CJ had several offers from teams in both Washington and California including UW. However, the college tours were cut short after his first stop in Pullman when he immediately decided WSU was where he wanted to play.

“I just loved it and then I also just felt at home,” CJ said, “with Coach Haskins being here and just the staff as a whole.”

Bill, who played in what was the Pac-10 at the time, was thrilled when his son declined offers from other universities and decided to play for a team in the Pac-12.

When CJ told his family his decision, the emotions seemed to pour out.

“Me, my wife and daughter were there when he said he was going to Wazzu,” Bill said. “He teared up, we all cried and I knew it was going to be something special, because you’re not going to cry if it’s not.”

When CJ first arrived on campus, he had to learn how to compete at a high level while adjusting to a new environment. He said it was hard at first being away from his family, but eventually he felt at home thanks to his teammates.

Despite adapting quickly to living in Pullman, CJ still had concerns about how to balance being both a student and an athlete.

“I was mostly nervous about just managing school and just sports too,” CJ said. “Once I got used to that, I think it made everything become easier.”

In his first few months as a Cougar, CJ has already become a key player on the team. Averaging 16 points along with 7.1 rebounds, his ability elevated him to a leadership role on the court.

With his agility and energetic style of play, CJ proved himself as a consistent player who would do nearly anything for his team. Haskins believes bringing CJ to Pullman was the right choice for the Cougars.

“I feel like he is exactly what Washington State needed, “Haskins said, “and needed in a really bad way.”

CJ has a strong work ethic and passion not only for basketball, but also academics. He plans on studying civil engineering.

CJ said he gives the sport of basketball all he has because he wants to make his family proud.

“This is the biggest part of my life, this is what I am here for,” CJ said. “So, I feel like I kind of have to work hard. Not even for myself but for my family because they raised me and I want to show the world that the person they raised me to be is someone that could be successful.”