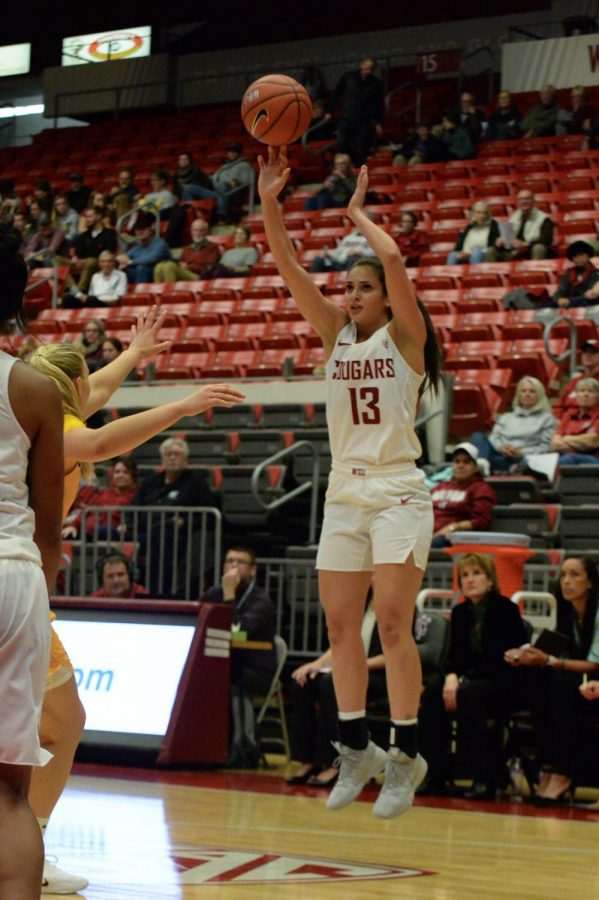 Freshman forward Shir Levy shoots the ball during a game against San Francisco on Nov. 29 at Beasley Coliseum. The Cougars won 91-61.

WSU women’s basketball will travel to California to take on Cal and No. 6 Stanford this weekend after dominating Colorado on Sunday at home to end a three-game losing streak.

The Cougars (7-9, 2-3) have had back-to-back weekends where they have been two completely different teams.

Two weeks ago, WSU nearly upset No. 11 Oregon State in Corvallis. Two days later, they were blown out by 40 points against No. 5 Oregon in Eugene.

This past weekend, the Cougars second-half comeback attempt against Utah fell short, but the team rebounded with a 74-48 thumping of Colorado.

Head Coach Kamie Ethridge said the team is going through the motions and not bringing a consistent energy into each contest.

“We need to respect the game and what it takes to be good at this game,” Ethridge said.

Four Pac-12 teams are currently ranked inside the Top 19 of the AP poll. In order to compete in the competitive conference, Ethridge said the team needs to bring their best every single day and every time they step onto the court.

Ethridge praised junior guard Chanelle Molina, who is averaging 15.8 points, 5.8 rebounds and 5.7 assists per game this season. Ethridge said she has been a key component to the Cougar’s success.

“The conviction and commitment to doing what it takes so we win,” she said. “That kind of energy, leadership and passion is what we need.”

Both games in California this weekend pose challenges to the Cougars that Ethridge is trying to prepare her team for. First, the Golden Bears (10-5, 1-3) have a player that will exploit WSU’s biggest weakness — defending the post.

Cal senior center Kristine Anigwe is 6-foot-4 and averages 21.8 points and 14.5 rebounds per game. Ethridge said the Cougars don’t want any part of Anigwe because of how much they have struggled defending teams with a post presence this year.

“She is a player-of-the-year type candidate,” Ethridge said. “It’s going to be a real team effort to try to slow her down.”

Senior center Maria Kostourkova, as well as the rest of the Cougars, will need to focus on boxing out and rebounding if they want to prevent Anigwe from taking over the game.

No. 6 Stanford (14-1, 4-0) poses another challenge as the Cardinal have yet to lose at home this season.

Ethridge said she loves the way the Cardinal play and hopes her team can compete like them in the future.

Stanford is led by senior forward Alanna Smith, who is averaging 19.7 points and 7.6 rebounds per contest. Ethridge said the Cardinal have tremendous talent at every spot on the floor.

Ethridge said playing a sloppy first half and turning the ball over 12 times as they did against Colorado on Sunday will not work against Stanford.

“You can’t make mistakes against them, or they’ll put 90 points on the board real fast,” Ethridge said.

The Cougars will take on Cal 11:30 a.m. Friday at Haas Pavilion. Tipoff against Stanford is set for noon Sunday at Maples Pavilion. The game against the Cardinals can also be seen live on Pac-12 Networks.