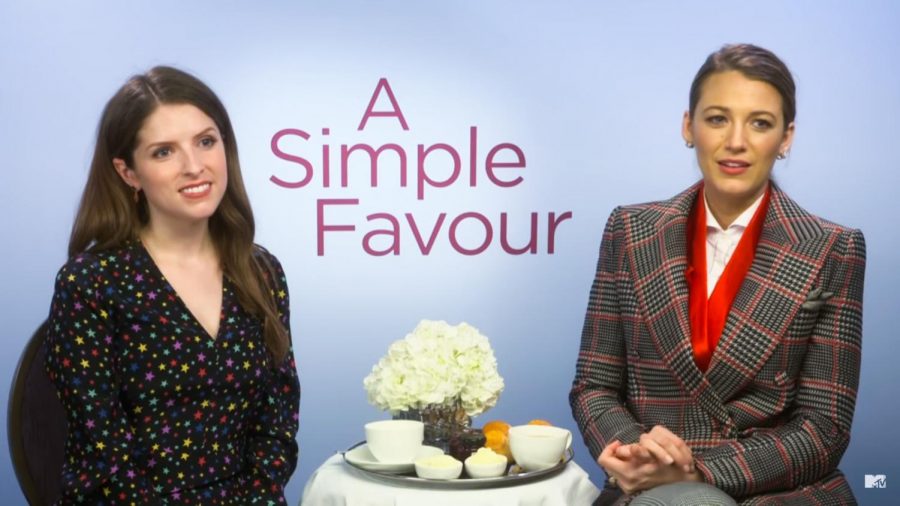 Anna Kendrick and Blake Lively star in the comedy-thriller.

Have you ever wondered what “Gone Girl” would have been if it had comedy? Lucky for you, you don’t need to, because the producers of “A Simple Favor” did it for you. Even more surprisingly, it’s actually not that bad.

This last weekend, I decided to go with a friend to see “A Simple Favor” at the CUB. I hadn’t researched what it was about or what genre it was. What followed was — to put it lightly — a very interesting experience since “A Simple Favor” turned out to be a mix of two often opposing genres: comedy and thriller.

Right from the beginning, which is bright and colorful with images of high heels and purses flashing across the screen while French music plays, it’s obvious “A Simple Favor” didn’t plan on leaning too heavily into the “thriller” side of things.

The cast of “A Simple Favor” includes Anna Kendrick and Blake Lively.

Anna Kendrick plays the character of Stephanie Smothers, a single mom with no friends due to her desire to volunteer for everything in her son’s life. Stephanie also runs her own “mommy vlog” where she shares various recipes and crafts while also discussing her life with her viewers.

Despite their opposite personalities, Emily and Stephanie become unlikely friends. Bonding over martinis and sharing stories that generate charming nicknames such as “brotherf-cker,” they become even closer.

That is, of course, until the thriller part of the story begins when Emily disappears.

Suddenly, Stephanie falls into the center of a mystery. As the story around the disappearance becomes more convoluted, Stephanie decides to take matters into her own hands and discovers everything isn’t what it seemed, all while documenting her updates on her vlog.

Thus the audience follows Stephanie as she grows out of her timid, unassertive personality into an intimidating, bold woman.

Watching the game of wits between Stephanie and Emily unfold is also fun, as various twists leave you guessing as to how the story will end. While there are dark themes in the film, they are balanced out by the many comedic moments.

As a result, neither genre greatly overpowers the other.

Anna Kendrick and Blake Lively’s on-screen chemistry only adds to the banter their characters engage in. Not only are the characters played by talented actresses, but the costume design is also beautiful, especially for Blake Lively’s character.

Of course, there are some flaws in the plot, such as Stephanie immediately having sex with Emily’s husband the day of Emily’s funeral. However, these flaws don’t destroy the viewing experience since the movie never tries to take itself seriously.

If you try to take this movie seriously, you will be disappointed. If, however, you sit back and enjoy the ride, it’s a good way to pass an hour or two.

Overall, I give “A Simple Favor” 3/5 stars. While it may not be the most memorable movie to come out in 2018 and doesn’t have a particularly outstanding plot, it was an enjoyable experience. For those who want to feel on-edge but still want to laugh, this movie is a good fit.