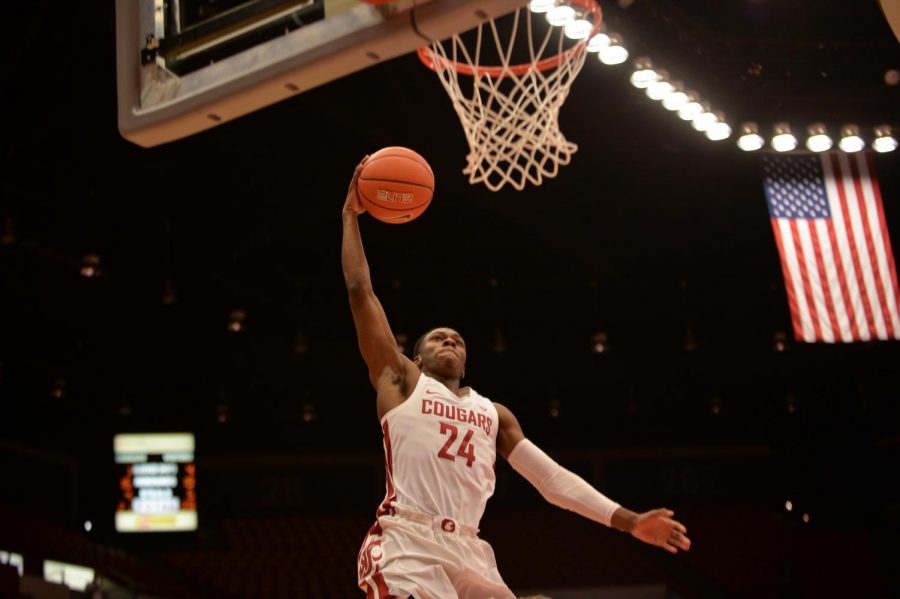 Senior guard Viont'e Daniels dunks the ball after shaking off the Stanford defense in the second half of Saturday's game at Beasley Coliseum.

A nail biting game for WSU men’s basketball ended in defeat as they fell to Stanford 78-66 Saturday. This was the Cougars first loss at home this season.

The energy from both teams was electric early on as the Cougars came out firing on offense. In the opening four minutes, WSU shot 4-7 from the field including a trio of three-pointers from senior forward Robert Franks, junior point guard Ahmed Ali and freshman forward CJ Elleby to take an 11-4 lead.

Though the Stanford offense fell flat early, they jumped back up to 53 percent from the field and only turned the ball over once halfway through the first half. This allowed the Cardinal to tie the game up.

WSU then went on a scoring drought lasting over four minutes while Stanford went on a 10-0 run to take a 33-23 lead.

Elleby ended Stanford’s scoring run by knocking down two layups to kick off a 9-0 run by the Cougars.

By the end of an exciting first half, Stanford led the Cougars 39-35 in front of a loud crowd in Beasley Coliseum.

Ali shot a perfect 4-4 from behind the three-point line in the first half, scoring 12 points to lead the Cougars.

In the second half, WSU turned the ball over three times in the opening two and half minutes. The Cardinal capitalized to take a six-point lead.

Five minutes into the second half, the Cougars went on a 7-0 run thanks to three Stanford turnovers. In this time, Elleby continued to stay hot and helped WSU get within one point.

With seven minutes remaining, it was a back and forth game full of excitement with neither team giving the other an edge throughout the half.

In the final minute of action, Stanford pulled away to hand the Cougars their fourth conference loss of the season.

WSU shared the ball well allowing four Cougar players to finish in double digits on the night. Elleby led the team with 18 points along with nine rebounds, Ali added 14 points and Franks finished with 12.

The Cougars will now hit the road to face Oregon State 8 p.m. Thursday at Gill Coliseum.