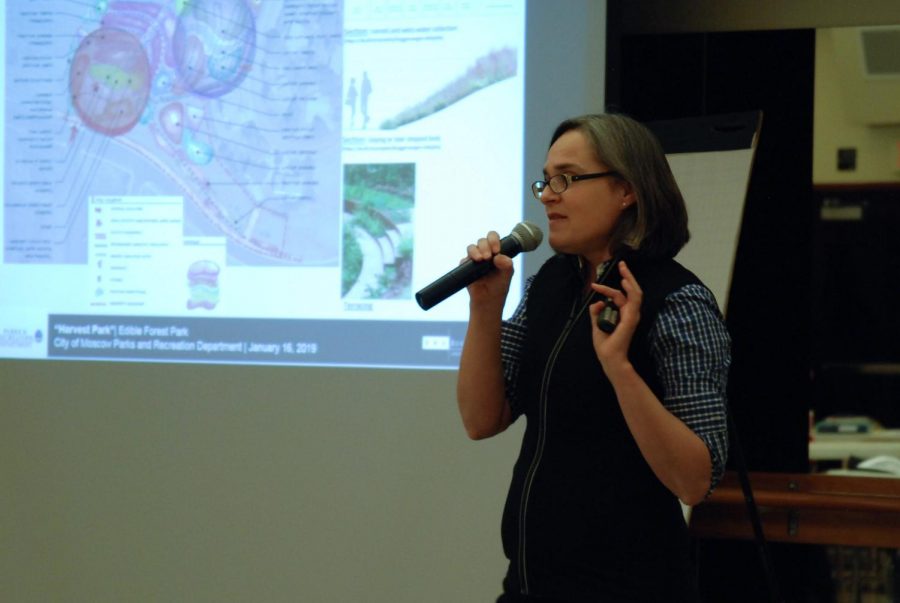 Paz Ochoa, a landscape architect with Bernardo Wills Architects, discussed the construction of an edible forest during a public workshop in Moscow’s Hamilton Indoor Recreation Center on Wednesday, Jan. 16.

Ochoa gave a presentation to the public on the current draft, beginning with explaining what an edible forest is.

“To condense down to the very basics,” Ochoa said, “An edible food forest is strategy for growing food, berries, nuts and fruit on a plot of land.”

Seattle opened an edible park to the public in 2016, with the goal of giving working-class neighborhoods access to nutritious food, according to an article from NPR. Seattle’s park inspired Moscow’s project, Ochoa said.

David Schott, assistant director of Moscow Parks and Recreation, said it’s hard to set an opening date, as the team is in early planning stages. The team hopes to open the park between 2020 and 2021. They will move to get funding for the forest when conceptual plans solidify.

Last week’s meeting over Moscow’s garden followed up on a previous workshop the recreation center hosted Dec. 19. Using the feedback, Ochoa said she began laying the groundwork for the edible forest.

Some of the most requested things from the first meeting included restrooms, drinking fountains, bike racks, night lighting and something that surprised her: the types of things grown in the forest, Ochoa said.

“There is a very well-informed public here,” Ochoa said, “who wants to garden, who wants to do agriculture and really wants to see this park become a successful edible forest.”

Using the previous feedback, Ochoa presented several options of what the edible forest may look like. One option had segregated planting zones while another took a more natural approach. Ochoa chose a middle ground design to meet both needs.

Ochoa’s goal was to give the people of Moscow what they wanted, but some of the public wished they were more involved with the project.

Misty Amarena is the executive director of Backyard Harvest and has been a Moscow resident for 10 years. She said the first meeting felt more like a true workshop with people marking up maps and going through options. When she came to the meeting Wednesday, Amarena said she walked away disappointed.

“It’s much different,” Amarena said. “It was a very input-driven, very interactive workshop. I was anticipating a similar approach on the management of the park tonight … not a second draft concept.”

Amarena said she planned to join the development team for the edible forest project, but because the communication began during harvest season, she was unable to participate.

She wanted to discuss the value an edible forest would have to people struggling to buy food. She said if the public could hear more of the benefits an edible forest could give them, they wouldn’t be as hesitant to fund the project.

“Folks who struggle with food insecurity in our area — which is quite a tremendous number of folks — should have an easy place to go pick and feed their families,” Amarena said.

While there were some aspects Amarena did not enjoy, she said she was happy to hear Ochoa say the edible forest would not be an amphitheater, and there would be covered areas to enjoy the forest year-round.

Amarena said she was glad the first meeting was being reflected in the plan and although disappointed the workshop wasn’t as hands-on, she was appreciative of the idea that alternative concepts are being explore and the city is open to different approaches.