After only one month Savanna Ly-Nguyen has proven to be crucial player on tennis team, she feels at home in Pullman 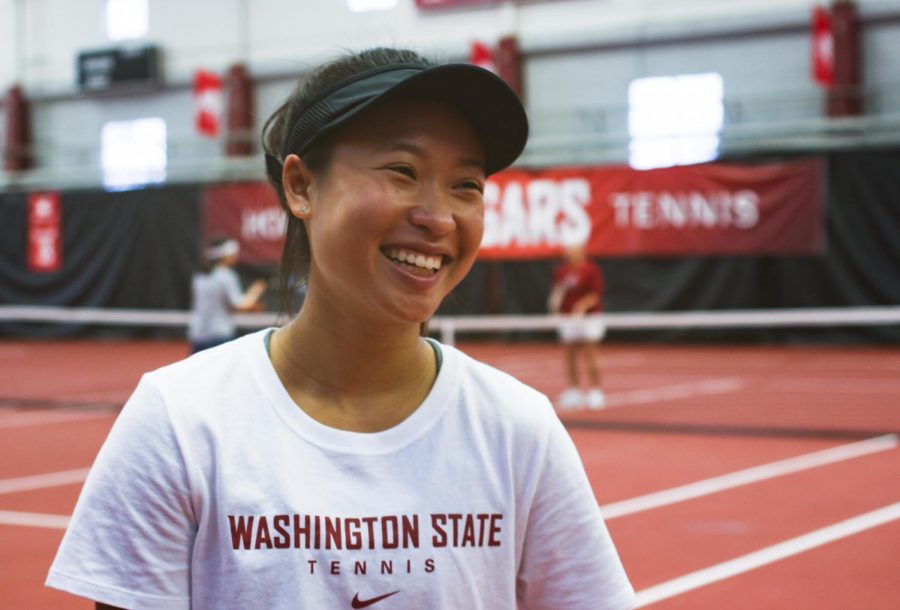 Freshman Savanna Ly-Nguyen (pronounced Lee-win) has been playing tennis since she was five years old. Growing up in Brampton, Canada, she developed a roaring passion for tennis over the past 13 years and this hasn’t been extinguished since coming to Pullman.

She arrived at WSU over winter break and since her first appearance at the Hawaii invitational, she remains undefeated.

“She’s obviously a really great tennis player but she also has a lot of maturity and poise in the matches,” Hart said. “You know she was down 4-0 in her match against Michigan State and handled it very calmly and came back and won it in straight sets.”

The freshman player has built an impressive tennis ranking, and has shown clear talent to present for WSU over the coming years.

After preparing for the upcoming matches in Stanford, Ly-Nguyen described her young upbringing in tennis came from her uncle who had also played.

“He really wanted to be a tennis player but he started late.” Ly-Nguyen said.

She said since she began competing nationally  at 10 years old, every single week she saw her ranking go up.

As she continued to play in Canada her skills and rankings rose among her fellow players.

Savanna was among the top five players for three years straight in the Under 18 rankings in Canada before coming to Pullman.

Ly-Nguyen said she is proud of her accomplishments and the Canadian U18 tournaments were a good experience for her.

“Getting fourth and fifth place in the Under 18 Nationals was one of my biggest achievements,” Ly-Nguyen said. “Because all the top players from Canada were all coming together, competing against each other was really great for me to get to the top five.”

Ly-Nguyen’s last U18 tournament was in 2017. Following those successful tournaments was her appearance in Vietnam.

There, she played tennis in a new environment. She said she appreciated the nice weather and could play full days outside.

She said she experienced a different tennis culture there but enjoyed visiting part of her native country.

During this time in Vietnam, WSU Assistant Coach Trang Huynh contacted Ly-Nguyen and gave her details on the university and the tennis program.

“She asked me if I would like to play college tennis and at the time I didn’t know about WSU,” Ly-Nguyen said. “I was very interested … When I came to visit here I just loved it. Everyone was super nice.”

Savanna said Pullman was more peaceful and rural away from the city of her hometown in Brampton, where it can be too loud.

Since making her debut at WSU, Savanna made big wins for the team. During her  first appearance at the Hawaii invitational, she won all three of her singles matches.

This undefeated nature is a staple point in WSU’s 5-0 record so far this year. Ly-Nguyen has already become a part of the Cougar family even after only being with the team for a month.

“So far the best thing that I’ve experienced here is just the team in general,” Ly-Nguyen said. “Everyone is being supportive of each other … we’re kind of like a big family.”