Freshman appreciates having chance to play for WSU, earn degree 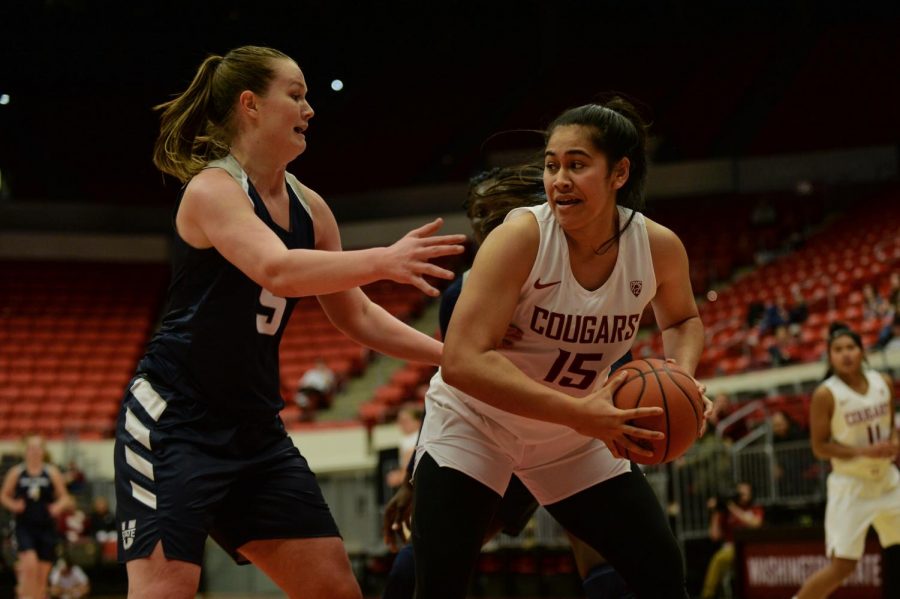 Freshman forward Ula Motuga says she is hoping to make a difference in her time at WSU. “We need to build a winning culture just so we can have some success in the future.”

Freshman forward Ula Motuga had a different route to becoming a Cougar than most of her teammates. From Logan, Australia, Motuga had a long distance to travel to come to WSU.

However, Pullman wasn’t the intended destination when Motuga first started thinking about playing college basketball. Head Coach Kamie Ethridge and her staff were interested in Motuga when they were at the University of Northern Colorado.

Motuga said she loved the school and the coaching staff. She had nearly decided on signing with Northern Colorado before she found out the coaches were heading to Pullman.

“On the last day, they told me the staff had been offered the job here at WSU,” Motuga said.

She said the coaching staff wanted her to follow them to Pullman. She went home first to consider her options.

Motuga said she knew going to a Pac-12 school meant games would be more difficult, but ultimately she believed in the coaching staff and found her way to Pullman.

Motuga committed to WSU without ever stepping foot on the campus. She said the first time she did, it felt different, but she quickly fell in love with Pullman.

Growing up in Australia, Motuga was the 22nd grandchild of 33 on her mother’s side of her family. She said her family was close and she used to play rugby with all of her male cousins.

Every weekend, all of her cousins would go to her grandma’s house where there was a basketball court nearby. She said basketball was the only sport she took seriously despite playing volleyball, netball and rugby as well.

“As I got older, I knew basketball was the sport for me,” Motuga said. “I started making state and national teams, then just focused on basketball.”

Most recently, Motuga played for the Australian team in the 2018 FIBA U18 Asian Championships in India. Motuga said she almost didn’t go to the last selection camps for the team because it was right before she came to WSU, but she couldn’t pass up the opportunity to play for her country.

She said the preparation for the Australian team was limited because some of the players were away at college, so they couldn’t play together much and build chemistry.

Motuga said representing her country was a feeling she couldn’t describe.

“My teammates became sisters, and we were all doing something we loved,” Motuga said. “I hope I get more opportunities to play for the green and gold.”

Motuga said playing for Australia was a great experience, but it delayed her coming to WSU and building relationships with her teammates.

Senior center Maria Kostourkova, who is from Lisbon, Portugal, said she faced similar issues while competing on national teams.

“There is a lot of us that play for national teams so that has happened with me before,” Kostourkova said. “I didn’t come when I was a freshman until August either.”

Motuga said she is thankful there are so many different personalities on the Cougars that allow her to fit in.

“Some teams are divided into two units, and as a freshman, you bounce between the two like a ping-pong ball,” Motuga said.

Kostourkova said she tried to make Motuga feel comfortable when she arrived on campus by drawing on her experience as a freshman.

“I knew how it felt for me to come here,” she said, “and I know what I enjoyed when seniors treated me a certain way … so I kind of based it off that on how I wanted to treat her.”

Motuga said she appreciates everything WSU has given her, including a scholarship to play the game she loves and a chance to pursue an education.

Before the season got in full swing, Motuga believed playing basketball and going to school wasn’t going to be too difficult because the team was only practicing five hours a week.

She said when it got bumped up to the 20 hours they’re at now, balancing school, basketball and sleep became stressful at times.

Motuga is undecided on a career path, but is interested in sport management and criminal justice. However stressful school may get, Motuga said she is thankful she gets the opportunity to study both fields and feels proud every time she puts on a Coug jersey.

“I think back to my first Pac-12 conference game at UW, a big rivalry game,” Motuga said. “I didn’t realize how much it meant to play for WSU until that game.”

Having the Cougar family has helped Motuga deal with being so far from home, but she said it can be difficult. Motuga said before coming to WSU, the longest she had been away from her family was nine days.

“Adjusting to being with my family every day to coming here and never seeing them is tough,” Motuga said. “Having a good group of girls on the team and friends outside of the team has helped a lot.”

Pullman was never the intended destination for Motuga, but now that she is here, she is looking to make a difference for years to come.

“We’ve definitely made it harder for ourselves and harder than it should’ve been,” she said, “but I just think learning a lot this year has helped me realize we need to build a winning culture just so we can have some success in the future.”