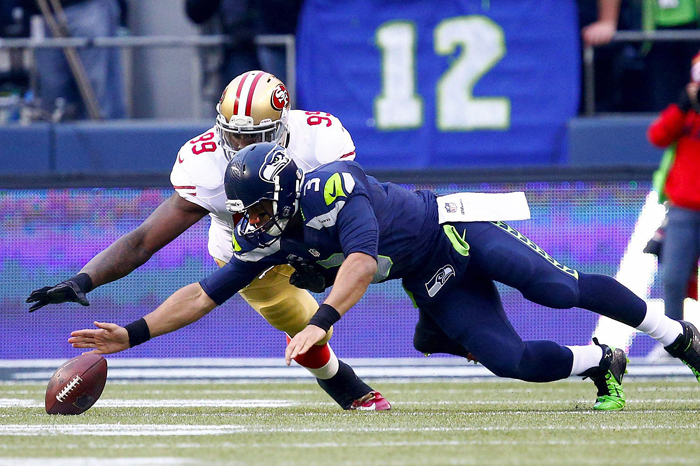 Russell Wilson scrambles for a fumble during the NFC championship game at CenturyLink Field, Jan. 19.

Media week is in full swing at MetLife Stadium in New Jersey as Seattle Seahawks’ and Denver Broncos’ players and coaches hold press conferences and indulge the media’s every desire.  However, all the talk and banter won’t mean a thing this Sunday as the Seahawks and Broncos square off in one of the most hyped and anticipated Super Bowl matchups in decades.

The talk for the last two weeks has been about Denver’s electrifying offense and Seattle’s smash-mouth defense. However, this matchup might just come down to the two lesser touted units.

On paper, the league’s best passing offense and best secondary may theoretically cancel each other out, which means the true matchup for Super Bowl XLVIII will be Seattle’s offense versus Denver’s defense.

This season Seattle’s offense ranked 17th overall in the NFL, 26th in pass offense, and fourth in rushing offense.  Seattle’s smash-mouth style on defense is the same for the offense, as Marshawn Lynch’s powerful ‘Beast Mode’ style of play sets the tone for the unit.  Lynch’s 1,257 rushing yards ranked sixth in the NFL and his 12 rushing touchdowns tied for the most in the league.  Lynch is truly the heartbeat of Seattle’s offense.

While the pass offense ranked in the bottom portion of the league, quarterback Russell Wilson did not suffer a sophomore slump.  Given the style of play Wilson did not have the opportunity for many 300-plus yard passing games, but his success came in the form of efficiency.  Wilson completed 63.1 percent of his passes, threw 26 touchdowns to only nine interceptions, and posted a passer rating of 101.2, which his second triple digit passer rating in as many seasons.

On the other side of the ball will be the Denver defense. The Broncos ranked 19th in total defense, 27th against the pass, and seventh against the run.  Defensive tackle Terrance Knighton anchored Denver’s formidable run stuffing defensive line, and defensive end Shaun Phillips filled the pass rushing role left behind by Von Miller’s absence, leading the team with 10 sacks.

The Denver secondary struggled without veteran cornerback Champ Bailey much of the season, and Chris Harris, who filled the No. 1 cornerback role in 2013, went down with a season-ending injury early in this year’s playoffs.

This means that for this Super Bowl matchup the 35-year-old Bailey will move from his relatively new position of nickel-back and return to his old position that he has manned in Denver for the past nine years as the No. 1 cornerback. Bailey missed the majority of the regular season, so it will be interesting to see how he handles Seattle’s speedy wide-outs Golden Tate and Doug Baldwin, as well as big-play man Jermaine Kearse.

Review of these matchups point to one key reality: Russell Wilson will be the key for a Seattle victory, and the Denver secondary holds the key to a Bronco victory.  With the punishing Marshawn Lynch facing off against a strong Denver front seven, Seattle will need to capitalize on a weak Denver secondary.

If Russell Wilson refrains from turning the ball over to his legendary counterpart Peyton Manning, completes 65 percent of his passes, throws for over 300 yards and at least three touchdowns, then the Seattle Seahawks will undoubtedly win this game, and Wilson will become the first Super Bowl MVP in Seattle Seahawk history.