Cougs road woes continue as they fall to OSU 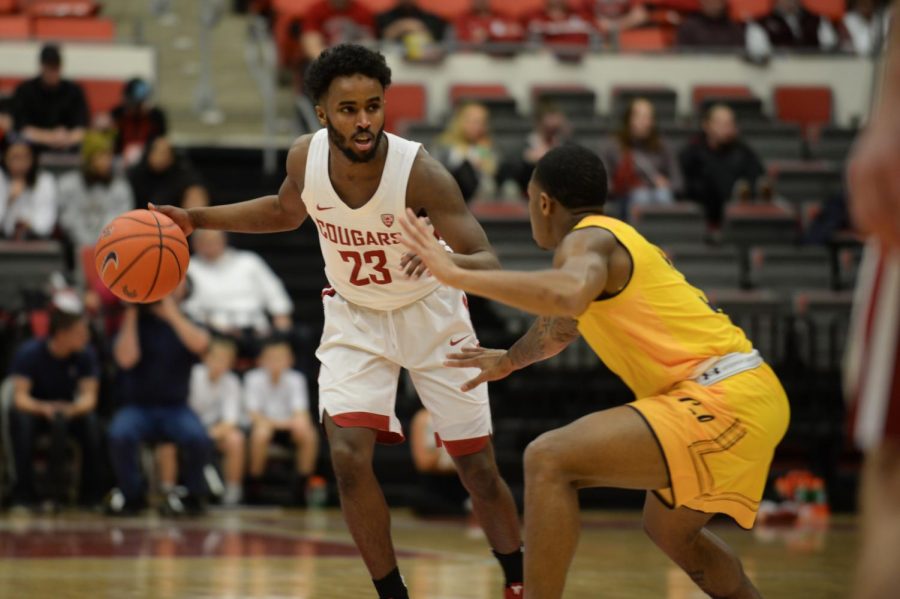 WSU junior guard Ahmed Ali tries to get past Cal junior guard Paris Austin during a game Jan. 17 at Beasley Coliseum. The game resulted in a 82-59 win for the Cougars.

WSU men’s basketball remained winless away from Beasley Coliseum after suffering a 90-77 defeat to Oregon State on Thursday night in Corvallis.

Both teams got off to fast offensive starts as WSU shot 3-5 in the opening four minutes and the Beavers were 5-8.

The Cougars (8-11, 1-5) struggled containing outside screens and stopping passes into the post, allowing the Beavers (12-6, 4-2) to score easy baskets.

Almost 10 minutes into the first half, WSU was failing to protect the rim and the Beavers height overpowered junior guard Ahmed Ali on the perimeter.

Senior forward Robert Franks couldn’t find an offensive groove early on but his shots started to fall at the halfway point of the first half. He led the Cougars with nine points to keep the Beavers lead below double digits.

Head Coach Ernie Kent kept the majority of his bench players off the court early on as the team fought to stay in the game.

Freshman forward CJ Elleby struggled early. He failed to knock down a shot or score a point in the first half as the starters combined for just 24 points.

In front of a loud Oregon State student section, WSU let the game slip away in the final minutes of the first half. The team missed several shots as they failed to keep up with the Beavers 61 percent shooting in the first 20 minutes. OSU led 52-36 at halftime.

Oregon State carried the momentum into the opening minutes of the second half as the Cougars looked lost on both ends of the court, trailing by 18 with 16 minutes left.

Elleby sparked the offense with six straight points allowing a short but much needed to run to get the crowd out of the game and shift the momentum. With 12 minutes left, WSU had reduced the deficit to nine points.

In the final minutes, Oregon State would pull away to hand WSU its fifth conference loss. Elleby led the Cougars with 21 points followed by Franks with 20.

WSU takes on Oregon at 5 p.m. Sunday in Eugene. The game can be seen live on ESPNU.