Tennis fights back from 3-0 deficit to top SMU

Cougars advance to face No. 1 Stanford at 2 p.m. Sunday 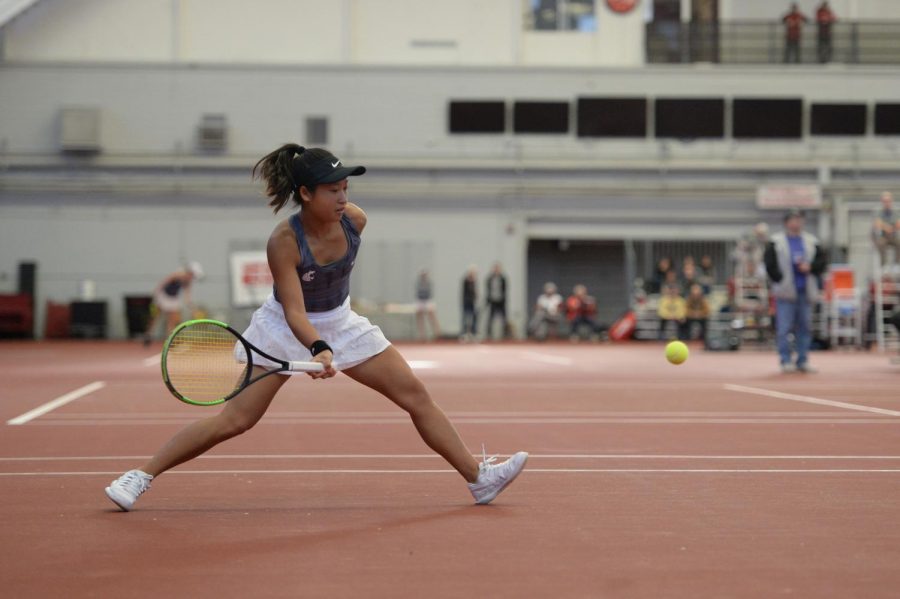 Freshman Savanna Ly-Nguyen prepares to return a ball during her singles match against Idaho's Anna Stefani on Jan. 12 at Hollingbery Fieldhouse.

Cougar tennis fought back from a 3-0 deficit to defeat Southern Methodist University 4-3 Saturday in a thrilling match at the ITA Kickoff Classic in Stanford, California.

The victory means WSU will face No. 1 Stanford at 2 p.m. Sunday.

“This was a total team win,” Head Coach Lisa Hart said in a WSU news release. “Our seniors showed absolute determination and grit to get the wins on their courts.”

The Cougars starting out by losing the doubles point to the Mustangs. Sophomore Michaela Bayerlova and Aneta Miksovska lost their doubles match 6-1 but freshman Hikaru Sato and senior Tiffany Mylonas were able to bounce back with a 6-4 win.

In the decisive third doubles match, SMU squeaked out a 7-6 victory as the Cougar pair of freshman Yang Lee and junior Melisa Ates fell to the Mustangs.

The Mustangs would carry their momentum into the singles matches, claiming the first two matchups to take a commanding 3-0 lead.

WSU now needed to win all four of the remaining singles matches to move on and face Stanford, and they would do just that.

Bayerlova started the improbable comeback with a 6-2, 6-3 win and Mylonas claimed her match in three sets to pull the Cougars within one point of SMU.

Up first was Mylonas who pushed her game to a third set victory 6-1, 1-6, 6-4 against previous SMU doubles opponent Shapovalova.

It all came down to freshman Yang Lee as she battled senior Karina Traxler for the decisive fourth point.

Traxler took the opening set 7-6, but Lee dominated the final two sets to complete the comeback victory for WSU.

Stanford swept Saint Mary’s 4-0 to earn its spot in Sunday’s matchup with WSU. Both teams are playing for the opportunity to move onto the National Indoors tournament in February.

“We’re excited about having the opportunity to play the No. 1 team in the country,” Hart said in the release.