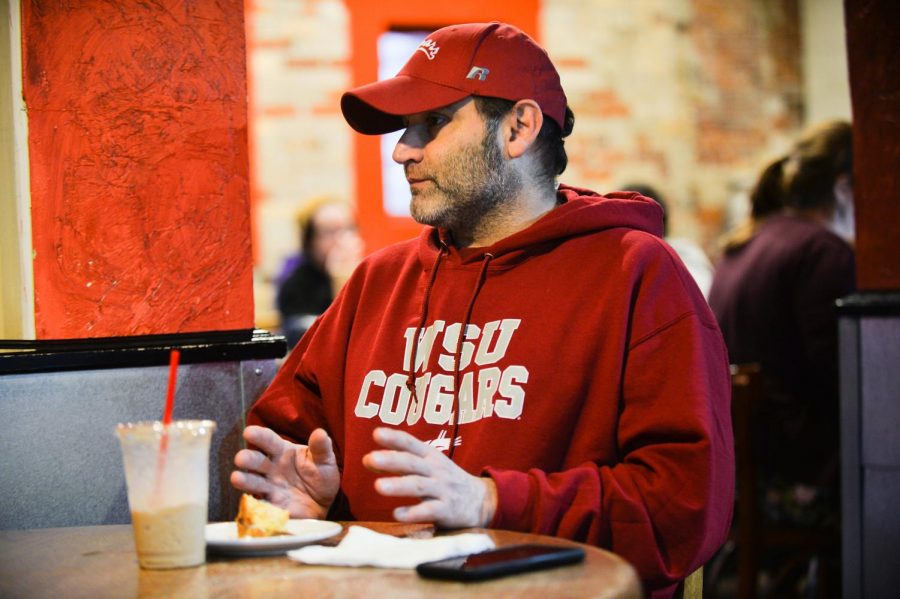 EDITOR’S NOTE: The Daily Evergreen has received a number of comments regarding the main source in this article, Paul, and his account of the stabbing that occurred on Oct 4, 2013. The Evergreen has seen and taken all of these comments into consideration and we take this very seriously, which is why we are now working on delving deeper into what happened that night. However we do not promote or agree with libelous accusations about the source and will delete comments that make unsubstantiated claims against anyone.

Chef Paul is the owner of Pauly’s Bar Room as of Jan. 1.

“What I really take pride in is feeding college kids for cheap,” Paul said. “All my drink prices and all my food prices are just cheaper than everyone around because … I remember what it was like to be a college student.”

Part of Paul’s mission to help college kids comes from an experience he had five years ago. This experience is also why he prefers not to have his last name printed.

“On Oct. 4 of 2013, I was attacked from behind in Port Townsend,” he said. “I was out with two friends, and we invited people back to my condo. Only one guy wanted to go. Turned out to be a psycho. He attacked me from behind, stabbed me five times in the back with an eight-inch kitchen knife.”

Paul’s friend saved him. He used pepper spray to fend off the attacker. It was too foggy that night to fly, so Paul said he had to endure an 80-minute ambulance ride. The ambulance crew was unable to stop the bleeding the whole time.

Once he got to the hospital, Paul had to have surgery that included removing the top half of his right lung. He was in a coma for a week.

“I’m very lucky to be alive,” Paul said. “As my sister says, my angels were watching out for me. But you know, it really made it important to me that I help other people … The whole stabbing thing was terrible but it made me really appreciate life.”

He went on to explain that it made him rethink everything. Paul said part of Pullman’s appeal is its safety.

Besides general safety, Paul also wants to make the bar as fun as he can.

The Pauly’s space once housed The Next Page, and before that it was The Sports Page. The previous owner removed a lot of the sports memorabilia when it transitioned. Paul has been working on putting that all back.

He’s also brought back the pool tables that were once there and added a dart board and a change machine. Pauly’s is also interested in bringing in Big Buck Hunter and Golden Tee Golf arcade machines, he said.

“We’re trying to bring it back to be a fun place for people to go out,” he said. “I want to really create a place for the community where they feel comfortable coming, whether they’re students or regulars or whatever.”

He wants to add karaoke on Sundays and a trivia night on Thursdays. He also wants to make Pauly’s a great late-night spot for food.

He drew from his college experience when designing the business model.

“In all honesty, I went to college,” he said. “There was a lot of times I was hungry at one o’clock in the morning and what are your options? Guess I’ll call Domino’s or make some ramen.”

“For years I have had Cougars coming down to UW to visit their friends … and I’ve been hearing for years ‘you gotta open a place like this at Wazzu, you gotta come to Pullman.’ ”

So on Jan. 1, 2018, Paul and his business partner came to Pullman in order to scope out the city. They visited Pullman five times throughout 2018. When they found The Next Page, they realized it would be the perfect location.

“We stumbled upon The Next Page and [the woman working] was delightful and she told us the woman who owned the bar was trying to sell so we were very interested,” Paul said.

Pauly’s will undergo several renovations in the near future, Paul said. The kitchen they have is very small, and are looking into expanding it. They also want to look into building a restaurant side so people under 21 can come enjoy the food too.

When Paul renovated, he prioritized the inclusion of as many Cougs as possible.

“If a student that’s an artist wants to get in contact with me, they can do that,” he said. “If carpentry students want to help with a lot of little repairs around the building that need to be done … I’m absolutely interested in having students come in and do a lot of stuff.”

Paul said he’s excited for the opportunity to offer something new.

“I was given a second chance in life,” he said, “and I want to do better than I ever did before. I want to really do good things for people and I want to provide this city good Italian food, good late night food options, and a good place to go drink that’s not going to gouge you.”

This story has been updated to reflect the correct location of Paul’s attack.