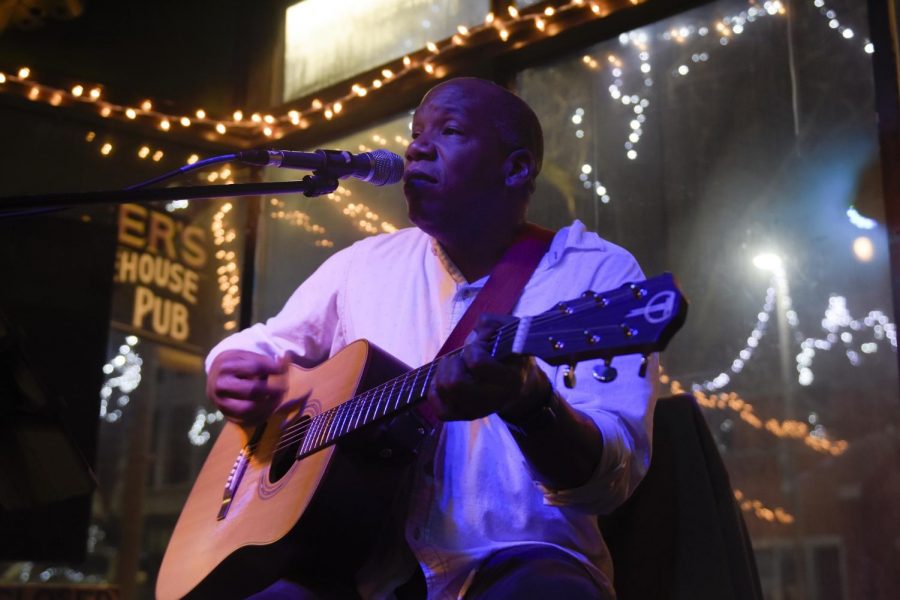 Ron Greene performed at Bucer’s Coffeehouse Pub Friday night, putting his own spin on songs from John Legend, Neon Trees and Christina Aguilera while mixing in his own works.

Ron Greene is a bluesy rock, pop and soul artist who has played music his entire life. He said his passion for performing is what drives him to put on over 100 shows in the Pacific Northwest each year.

“It’s always your fear that you’ll go someplace, and it’ll be a dud.” Greene said. “The way I look at it, no matter where I go, no matter if I am just connecting with one person in the audience, I want to be there for that one person.”

Pat Greenfield is the owner and operator of Bucer’s Coffeehouse Pub and said she has 20 years of experience scheduling music performers.

Greenfield said she was challenged to find a time that would work with Greene and Bucer’s busy schedules. After months of trying, Greenfield was glad she finally got a hold of the artist.

“He contacted me again a month ago,” Greenfield said. “This was the first time I actually heard him live. I was pretty impressed.”

Greene said he has had his share of highs and lows in his long career. From performing for an audience of a single person in Coeur d’Alene to opening for Trombone Shorty, Greene said he is looking to make a musical connection each time he gets on stage.

The passion he has for performing extends into his songwriting, Greene said. Some songs are written in five minutes after a shower, while others may take an entire year of collaboration.

“You never really know what’s going to hit,” Greene said. “It’s been fun and it’s been scary because you’re putting yourself out there when you write. Of course, you want to be accepted, but sometimes you’re not. You’re riding that edge of happiness and depression.”

Bucer’s seated people at every table when Greene began his performance at 8 p.m.

Greenfield said she found many gem musicians in the area and is grateful that many reach out to her. Other coffee shops may take anyone who is willing to perform for free, but she looks for quality performers and is happy to pay them well.

As the performance drew to a close and people shuffled out of the coffee house, Greene played an encore song for the eight people remaining. He said it was cool to see the Moscow crowd come out to support him.

“This was a really good show,” Greene said. “The people here were really appreciative. They clapped. They were engaged and to get the response that was happening was really, really cool. The owner texted me. I’ll be coming back.”

Greene will be returning to Bucer’s with his band “GRE3N” on Feb. 23. Anyone interested in seeing Ron Greene or other music artists can visit Brucer’s Coffeehouse Pub, 201 S. Main St.