WSU shoots an abysmal 25.5 percent from field in 17-point defeat to No. 9 Oregon State at home Sunday 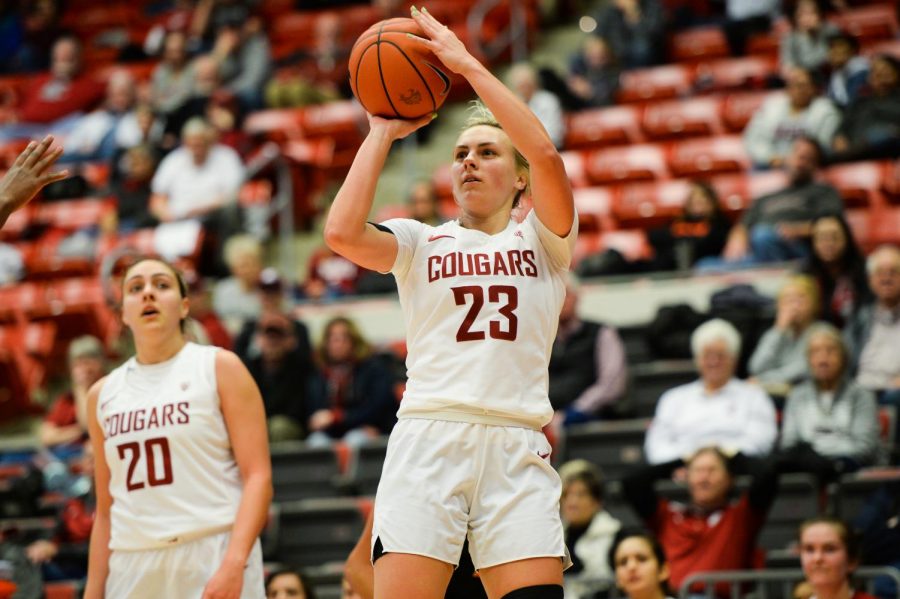 Senior guard Alexys Swedlund misses a shot during the game against Oregon State on Sunday at Beasley Coliseum.

On Sunday afternoon, the trio struggled as they combined for just 21 points. Swedlund shot 0-8 and was held scoreless in the game.

A lack of production from their key players combined with a poor performance from the supporting cast meant the Cougars couldn’t keep up with the Beavers (17-3, 7-1).

“We don’t have a ton of talent,” Ethridge said. “We have three solid scorers, so we have to be really good at what we do.”

The Cougars struck first on a layup from senior center Maria Kostourkova. This would be WSU’s sole lead of the game as Oregon State jumped on the Cougars early to take a 16-7 lead after one quarter. WSU made only three field goals in the opening 10 minutes.

Both teams struggled on offense in the second quarter as the teams combined to make five field goals and score 15 points. WSU shot 14.3 percent from the field in the quarter while OSU hit 15.8 percent. The Beavers took a 23-15 lead into halftime.

After shooting just 20 percent in the first half, the Cougars trailed the Beavers by only eight points.

Ethridge said from the warm-ups to the end of the contest against the Beavers, WSU never had enough energy.

“You only get so many opportunities to turn the lights on and play the game,” Ethridge said. “We didn’t get ourselves ready to play this game.”

The third quarter saw the Beavers find their offensive rhythm as they shot 53.8 percent to pull away from the Cougars and take a 41-28 lead.

WSU improved its shooting in the third quarter, knocking down 42.9 percent of its attempts but it wasn’t enough to keep with OSU.

The Cougars were abysmal on offense in the final quarter. They made only three baskets as the Beavers claimed victory.

Molina led the team with 12 points and nine rebounds, Hristova had nine points and 12 rebounds and Kostourkova added seven points and six rebounds.

The disappointing performance comes after the Cougars had a halftime lead against No. 5 Oregon on Friday. WSU ultimately lost that game 79-64.

The Cougars held OSU, the No. 1 team in the nation in three-point field goal percentage, to just 29.4 percent from behind the arc.

Molina said the team was able to translate the defensive mentality they had against the Ducks to the game with the Beavers.

“We brought the same intensity we did against Oregon,” Molina said. “We worked hard not to give them easy shots.”

The Cougars will look to execute better offensively and end a four-game losing streak when they head to Los Angeles to face UCLA 7 p.m. Friday at Pauley Pavilion.