Tennis drops first match of year against No. 1 Stanford 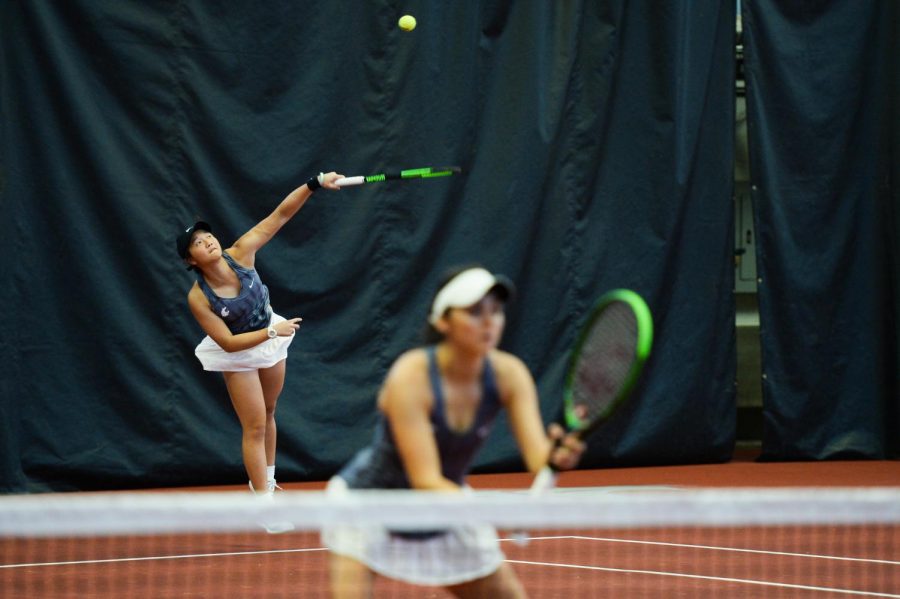 Freshman Yang Lee serves over junior Melisa Ates during a doubles match against Idaho Jan. 12 at Hollingbery Fieldhouse. The Cougars swept the Vandals 4-0.

WSU tennis dropped its first match of the season as they fell to No. 1 Stanford 4-0 Sunday in the second round of the ITA Kickoff Weekend in California.

The Cougars (6-1) advanced to the second round after fighting back from a 3-0 deficit to defeat Southern Methodist University 4-3 Saturday.

In the match against the Cardinal (2-0), WSU fell behind early as they lost the doubles point.

Stanford seniors Caroline Lampl and Kimberly Yee, the No. 7 doubles duo in the nation, clinched the point by defeating Senior Tiffany Mylonas and freshman Hikaru Sato 6-2.

On Saturday against SMU, the Cougars started out losing the doubles point to the Mustangs. Sophomore Michaela Bayerlova and senior Aneta Miksovska lost their doubles match 6-1 but Sato and Mylonas were able to bounce back with a 6-4 win.

In the decisive third doubles match, SMU squeaked out a 7-6 victory as the Cougar pair of freshman Yang Lee and junior Melisa Ates fell to the Mustangs.

The Mustangs would carry their momentum into the singles matches, claiming the first two matchups to take a commanding 3-0 lead.

Bayerlova started the Cougars improbable comeback with a 6-2, 6-3 win and Mylonas claimed her match in three sets to pull the Cougars within one point of SMU.

Up first was Mylonas who pushed her game to a third set victory 6-1, 1-6, 6-4 against previous SMU doubles opponent Anzhelika Shapovalova.

It all came down to freshman Yang Lee as she battled senior Karina Traxler for the decisive fourth point.

Traxler took the opening set 7-6, but Lee dominated the final two sets to complete the comeback victory for WSU.

WSU will travel to Waco, Texas, next to face Baylor 3 p.m. Feb. 8 at Hurd Tennis Center.