Students can transfer whenever, athletes have to wait one year before 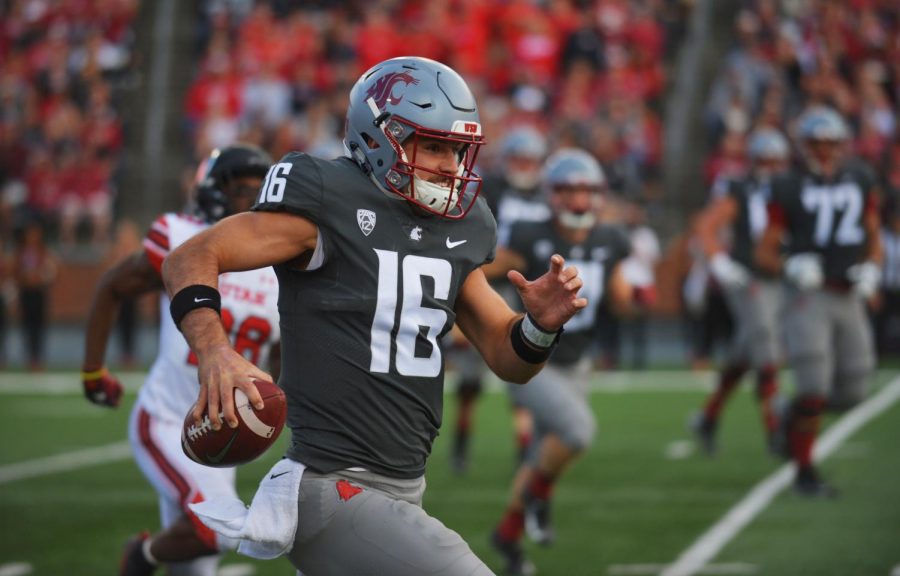 Quarterback Gardner Minshew II runs the ball down field for a gain of yards in the game against University of Utah on Sept. 30 at Martin Stadium.

College students have the ability to change their university relatively freely. Student-athletes are held to a different standard and have restricted options when it comes to leaving sub-optimal conditions.

This year, transfers played a big role in college football as many talented players excelled after a change in scenery. Quarterback Gardner Minshew II is a great example of a player who elevated his career by transferring to a better program and university.

On the surface, the transfer rule created by the NCAA seems straightforward and fair. However, the intentions behind it are far from pure.

Student-athletes in baseball, men’s and women’s basketball, football and men’s ice hockey are forced to sit out an entire season and forfeit a year of their limited athletic eligibility if they transfer schools.

The NCAA claims that this is for the sake of the student. According to the official website of the NCAA, transfers are regulated so that student athletes can make logical decisions regarding their futures.

Communication Professor Benjamin Shors, who teaches a class on sports and the media, said reform on the rule is imminent and is called for from many different groups involved in college athletics as a whole.

“Is [the transfer] about academics or athletics?” Shors asked. “Are we trying to get people additional educational opportunities?”

These questions must be answered while reforming this consequential element of college athletics. Perspectives of students, coaches and universities must be catered to in order for effective change to occur.

If the NCAA actually wanted transfer students’ restrictions to correlate to academic reasons then simply finding a better program at another school should be enough justification to transfer. As a student, I’m free to transfer at any time without constraint. For student-athletes, it’s a different story.

While Kent has reason to be against transfers as a coach in a smaller market, player mobility is not a bad thing for college basketball. Players putting themselves in the optimal position to succeed only increases the quality of the sport and enhances their chances of playing professionally.

During Kent’s five years at WSU, 14 players he recruited to Pullman have transferred, including guard Malachi Flynn.

“Sitting up here in Pullman, we have guys who aren’t the four-star recruits coming out of high school,” Kent said. “You develop them, and two years later, they look like a four-star recruit and they move on to greener pastures.”

This dilemma is obviously frustrating for a coach, especially one as passionate as Kent. As a Pac-12 school, WSU is not as inept on the transfer market as it may seem. Freshman guard Chance Moore recently transferred to WSU from Wichita State.

Kent didn’t seem to have a problem with transfers in regard to Moore, who will be eligible to play this time next year.

Shors said he is against players having to sit out a year because it hurts student-athletes academically, which is exactly what the rule aims to prevent.

As a student who has the power of mobility, athletes should have the same capabilities to move to the best situation for them. While some programs may suffer as a result of increased mobility, college sports should always put the athlete’s interests first.