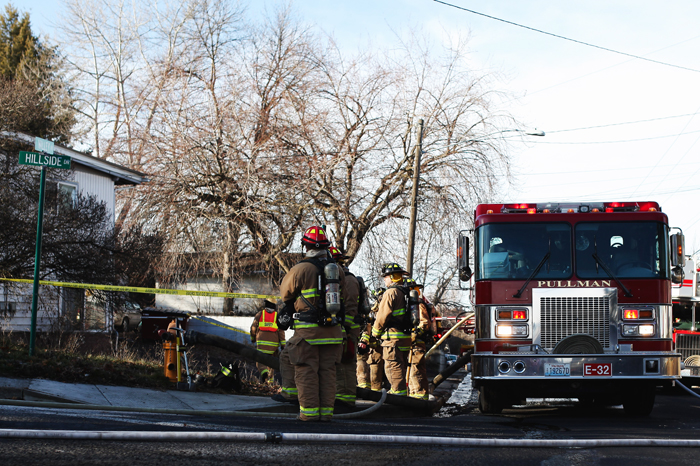 Police and fire responded to reports of a high-level structure fire yesterday morning which caused approximately $8,000 in damages to a rental unit on Hillside Drive.

A clogged heat exchanger for the gas boiler set fire to the floor, which then then spread to support beams, according to a press release. The downstairs neighbors in the four-plex apartment called 9-1-1 at around 9:30 a.m.

The harm was mostly contained to the upper unit, but the downstairs unit sustained some water damage.

“Luckily it was a very good stop by the crews – they held it in the room it was in,” said Assistant Fire Chief Ryan Scharnhorst.

The Pullman Police arrived to the scene first and confirmed smoke and flames in an upper unit, Scharnhorst said. Pullman Police officers evacuated all residents.

Kathy Wilson, owner and broker for DRA Real Estate, the agency which owns the rental, said repairs are currently underway and she hopes residents will be able to return to their apartments by today or tomorrow.

“The damage was not so bad that it can’t be repaired in the next few days,” Wilson said.

Fire crews already out on the road responded to the incident quickly and attacked the blaze offensively, Scharnhorst said.

While the occupant was not in the unit at the time of the fire, the occupant’s dog, named Tazo, was in a kennel in the smoky apartment. Tazo was let out of the house by fire crews and was unhurt.

The neighbors in the unit below the fire were evacuated, Scharnhorst said.