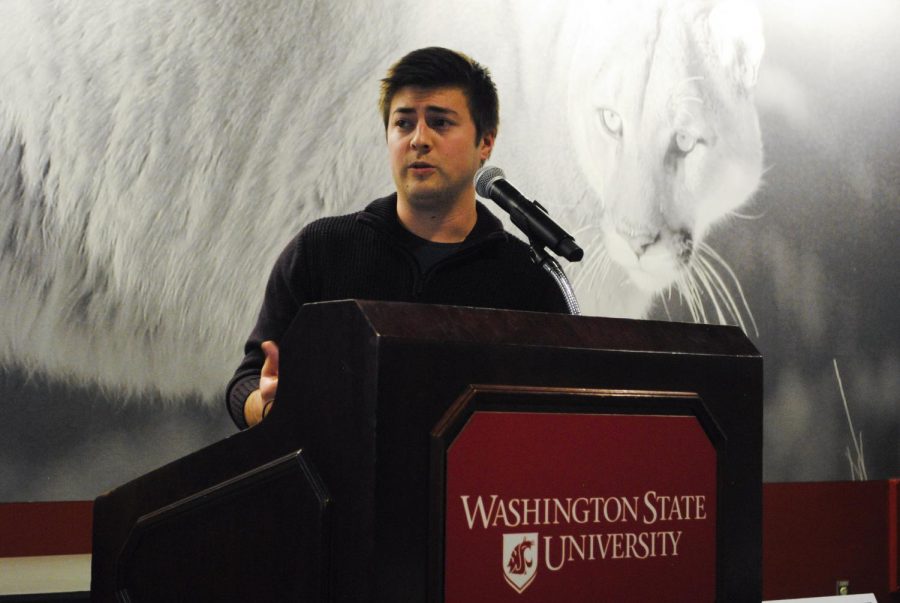 Francis Benjamin, the co-chair of the Pullman 2040 committee, talked about its efforts to change and improve the Pullman community at the GPSA meeting Monday night.

He said the committee had looked at people’s feedback about what they wanted for Pullman, which included a small community that was friendly, welcoming, vibrant, safe and diverse.

There were comments saying downtown should improve, specifically the restaurants, entertainment and shopping, Benjamin said.

He said there is a way-finding committee, which works on improving the trail system, the path sys-tem, maps and transportation, including driving.

There is another committee that added Music On Main and the butterfly mural, and looks to add more art, Benjamin said.

“Art makes a tremendous difference in the community,” he said.

There was a question regarding whether some long-term residents like the city’s expansion.

When big-box stores come in, there is sometimes opposition surrounding that, he said.

“Our community wants to grow,” Benjamin said. “For the most part, people do embrace the growth that is happening.”

Another question arose regarding Moscow-Pullman connections.

Some areas do have a working relationship, he said.

“Just like there’s a divide between WSU and [University of Washington],” Benjamin said, “there [are] still some areas that are divided between Pullman and Moscow, in that context.”

Benjamin said the committee is trying to bring people together around food and housing security. He said this is happening on a regional scale, not just in Pullman.

In response to another question, Benjamin said the committee is trying to help people understand how important it is to invest in the community.

He said an idea the committee is thinking about is an Angel Investor fund. Many of those funds look at how best to invest the money so investors see the greatest return.

Benjamin said the committee is looking at one in which the greatest return on investment is made if the company stays in either the region or in Pullman.

He said he and a few GPSA senators will meet with Lisa Gloss, dean of the graduate school, on Wednesday.

They will discuss the statistics the organization collected. Gloss will tell them how and when the sti-pend levels were created, and how they might collect the best data to inform potential changes in the future, Silva said.

“There’s some students that are really struggling,” Silva said. “Some programs are really not paying their graduate students enough to really make it here in Pullman without making some really severe cuts to their lifestyles.”