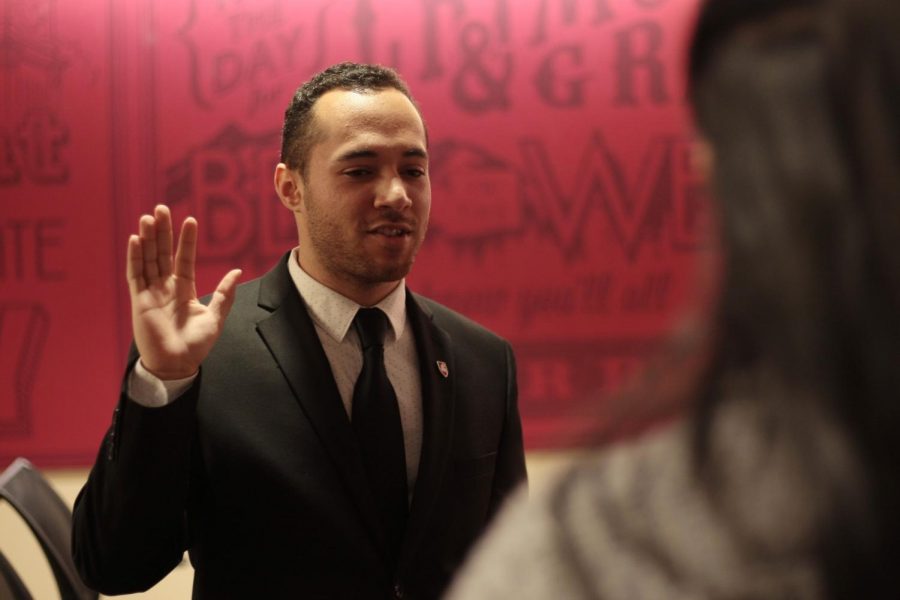 Jelani Christopher is sworn in as freshman delegate after his unanimous confirmation during the ASWSU meeting Wednesday evening in the CUB. He plans on increasing recycling methods during his time on the senate.

The role of the committee is to direct mental health initiatives in a way that will benefit students at WSU, she said.

A recent initiative has come from the committee to create an annual service at WSU, Oliver said.

“We are trying to create this tradition that will allow students and WSU community members to remember and honor the lives that have been lost,” she said, “in a way that promotes healthy grieving practices and reinforces support in the community.”

Oliver said she has created a survey for students who would like to give their input to the committee regarding their plan to create a memorial service.

She said the surveys will be anonymous and confidential. The committee will be collecting survey data now until Feb. 15 from 20 different groups on campus.

There will be an opportunity for students to take a survey and hold a group discussion Thursday at 6:30 p.m. in CUB, Room 204, Oliver said.

This is a way for students to voice what they would like to see in the development process, so their input can be implemented into the plan, she said.

She said she will reach out to groups involved in the survey process to give updates on the status of the plan.

“It’s kind of evolving as it goes,” she said referring to the development of the memorial service.

Jelani Christopher, a WSU freshman was confirmed as a freshman delegate to the ASWSU Senate.

He said one of the first things he will do as freshman delegate will be, “to encourage more recycling.”

There are many trash cans that are only labeled as landfill around campus, and he hopes to change that, Christopher said.