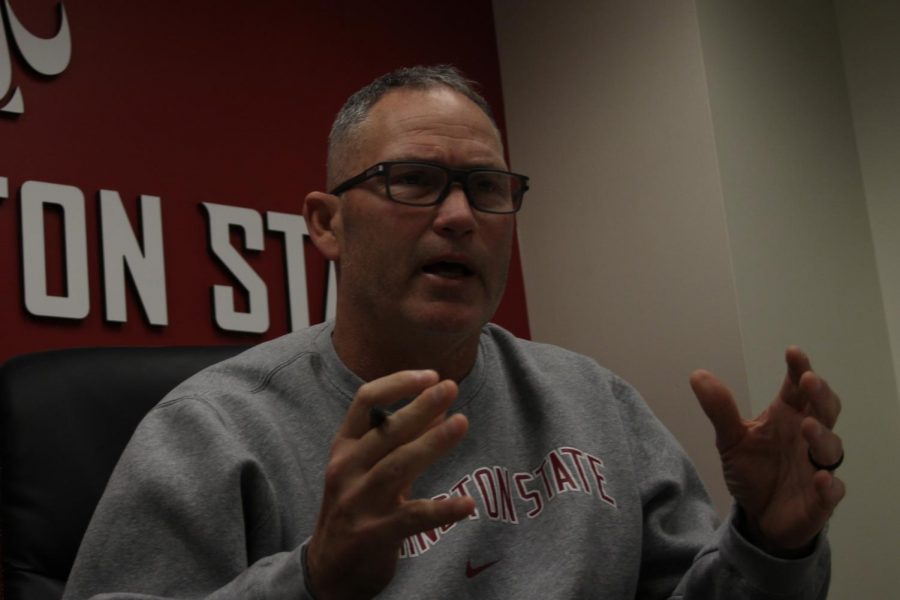 Baseball coach Marty Lees explains how the new Cougar baseball clubhouse will allow WSU to compete and recruit at a higher level Tuesday in Bohler Gym.

The Board of Regents approved a $10 million project Jan. 25 to start building a new baseball facility at WSU.

Chun said the money for the project has all been pledged, but not all of it has been donated yet.

“Because we have X amount of cash and X amount of pledges,” Chun said, “there is a gap until those pledges are filled.”

The Board of Regents approved the funding of the remaining $3.5 million, according to the document. 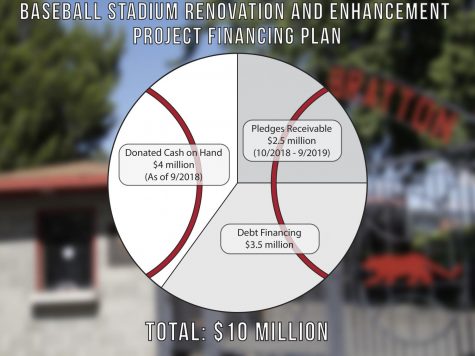 “The idea of issuing debt in our current financial situation did not seem like a good idea to me,” Student Regent Jordan Frost said. Graphic by Oliver McKenna at The Daily Evergreen.

Student Regent Jordan Frost was the only regent to disagree with the plan.

“The idea of issuing debt in our current financial situation did not seem like a good idea to me, given that we’ve had to make cuts, and we still have to make cuts,” Frost said.

He said people on other WSU campuses disapprove of this spending plan. Some classes are already over capacity, and there is not enough money to buy supplies or upgrade materials.

“We shouldn’t issue debt to athletics in the middle of our recovery since that’s the way we got here,” Frost said.

Frost said he would not have an issue with the plan if the university already had all the money from the private donors before building.

He said the university was short $2 million in pledges for the project last year, so they were not ready to build it.

“That’s the reason why we put the project forward — because we had all the money accounted for, either in cash or pledges,” Chun said.

He said construction will begin this fall and they hope to have the facility done by the start of the 2021 baseball season.

Head Baseball Coach Marty Lees said it is likely that the building will be 16,000 or 18,000 square feet. This new facility will allow WSU to compete and recruit better.

Chun said the current facility is not up to national standards. Lees agreed it is time to upgrade the baseball facilities at WSU.

Lees said he thinks WSU had the best facilities in the early 90s, but since then many schools have put a lot of money into their baseball programs.

He said they would like to have those same amenities that could train student athletes at a championship level, which includes a locker room that is not three blocks away from the field.

“That’s one of the things kids are considering when you’re looking at playing baseball in the Pac-12,” Lees said.

Other amenities he said they would like included are an equipment room, training room, classroom, player’s lounge and coaches’ offices.