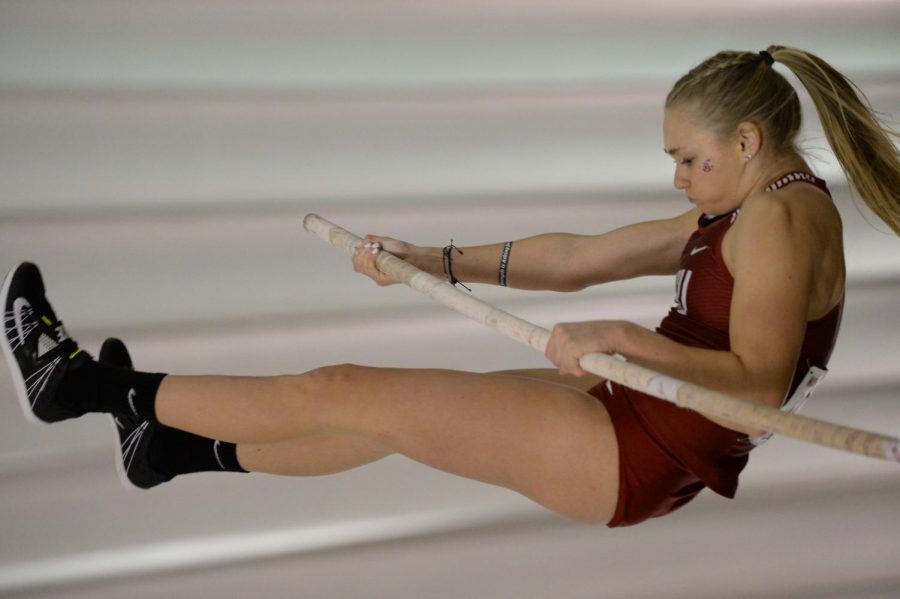 Redshirt junior Molly Scharmann competes in the pole vault at the WSU Indoor on Jan. 19.

WSU track and field returns home to host the Cougar Indoor on Friday and Saturday after picking up 10 event victories in New Mexico this past weekend.

The 60-meter hurdles in the men’s heptathlon and the men’s long jump will start the second day of competition at 10 a.m. Saturday. A majority of the running events will be held on this day while a handful of field events will be contested.

Last weekend, the Cougars competed at the UW Invitational and the New Mexico Team Invitational where they once again set personal records and new WSU indoor records.

In Seattle, freshman Emma Jenkins set a new personal record and broke the WSU freshman indoor record in the 3000-meter with a time of 9:43.66.

In Albuquerque, freshman Charisma Taylor had a mark of 12.96 meters in the women’s triple jump to set a WSU indoor record. Taylor now has top-10 marks in the triple jump and long jump in the WSU history books.

Junior Emmanuel Wells Jr. sprinted to a personal record 6.67 seconds in the men’s 60-meter dash, tied for the fourth-fastest time ever by a WSU athlete. Sophomore Jake Ulrich raced to the 11th best time in the nation in the men’s 400-meter dash.

The Cougar Indoor will begin at 12:30 p.m. Friday and conclude Saturday inside the Indoor Practice Facility.