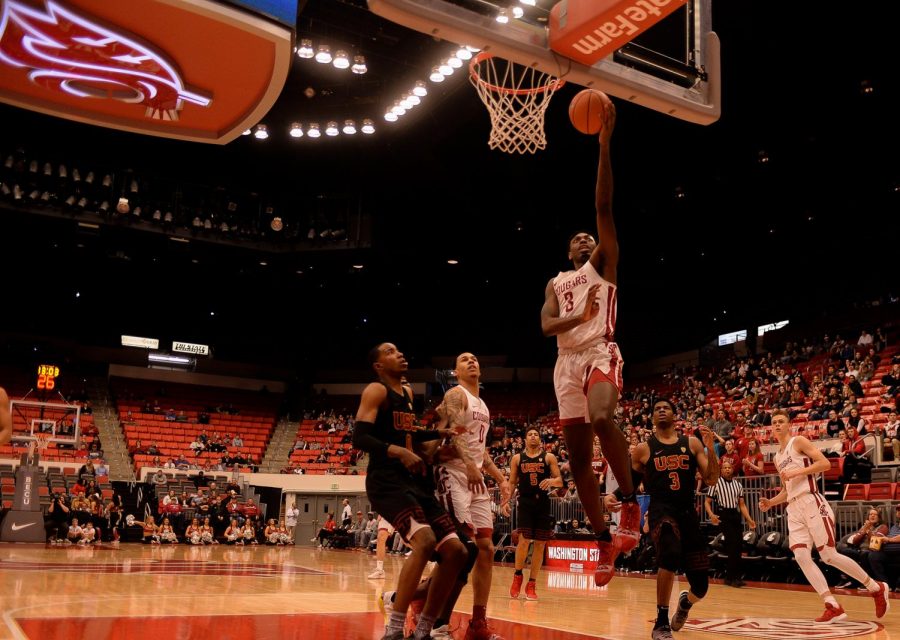 Senior forward Robert Franks goes in for a layup, scoring two points during the game against USC on Saturday evening at Beasley Coliseum. WSU lost 93-84.

WSU men’s basketball fell to USC 93-84 on Saturday night at Beasley Coliseum. This victory ends a five-game road losing streak for the Trojans while the Cougars extend their losing streak to five.

Junior point guard Ahmed Ali, who had a career high 18 points and seven assists in the game, said the team didn’t come out with enough focus to begin the night.

“I think we needed better energy in the game,” Ali said. “I feel like if we would’ve started the game better we would’ve had this win.”

WSU would eventually find its footing on offense to pull within five points with just under seven minutes remaining in the first half. USC then responded with another 11-0 scoring run to take a 16-point lead. The Trojans would take a 47-33 lead into halftime.

The Cougars carried the offensive success they found at the end of the first half into the start of the second half as they traded baskets with the Trojans in the first eight minutes. Ali and freshman small forward Aljaz Kunc came off the bench and provided WSU with a much needed offensive spark.

Although WSU started finding shots and opportunities throughout the second half, the Trojans hard-pressing offense kept the Cougars defense on their toes. USC finished the game shooting 58.9 percent from the field and 55.6 percent from behind the three-point line.

The Cougars lack of scoring in the first half helped the Trojans keep the lead the entire game. WSU finished the contest with a 42 percent field goal percentage, which was not enough to make a comeback.

Kunc scored a career high 14 points on 4-5 shooting with two three-pointers. Although Kunc fouled out with three minutes left in the game, he was a well needed asset for the Cougars.

Kunc said he is adjusting to playing in the Pac-12 and is making the most of his minutes.

“As my play time increases, so does my confidence,” Kunc said. “I got some good looks, some great passes and some good shots.”

Freshman forward CJ Elleby struggled in the game as he went scoreless in the first half and finished with just seven points.

Senior forward Robert Franks finished the game with 25 points and six rebounds on 8-17 shooting. The Cougars bench contributed 47 points as the team shot a school record 41 three-point attempts and only converted 34.1 percent of them.

The Cougars will hit the road 5 p.m. Thursday to face Arizona State in Tempe before battling Arizona 4:30 p.m. Saturday in Tucson. Both games can also be seen live on Pac-12 Networks.