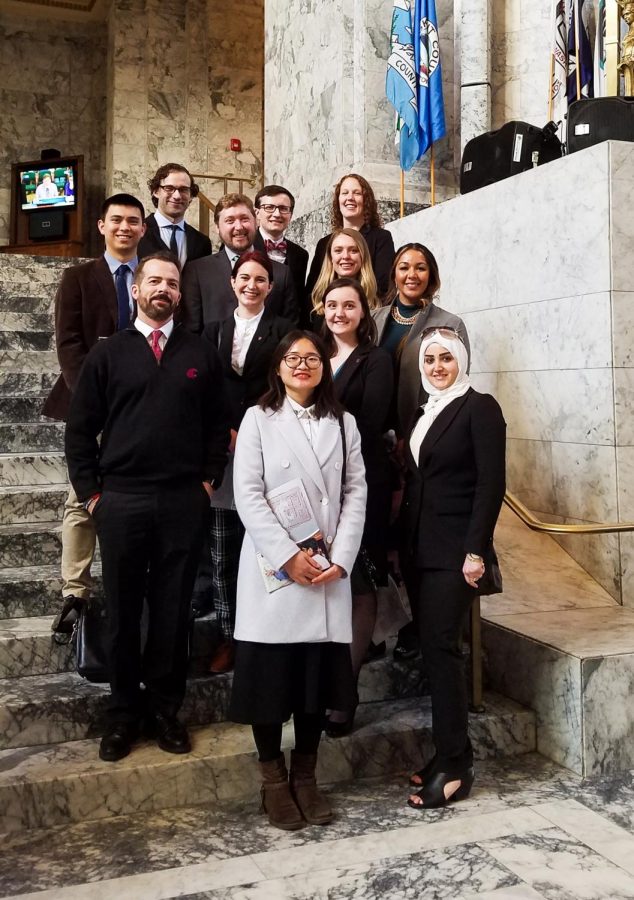 “Even if they don’t go into politics, they have a little bit more familiarity with having these kinds of discussions around public policy and issues that affect them,” said Joshua Munroe, GPSA vice president of legislative affairs.

GPSA senators brought awareness to resource limitations and lobbied for more financial support regarding graduate and professional students at the annual Coug Day at the Capitol in Olympia, Washington.

Andrew Gillreath-Brown, a graduate research assistant in WSU’s Department of Anthropology, said it was his second year participating in Coug Day at the Capitol. One of the topics they brought forward to senators and representatives was the WSU research and extension centers.

Joshua Munroe, GPSA vice president of legislative affairs, said it was the first time they were able to bring graduate students who study at the research and extension centers. There were two representatives from the WSU Prosser Irrigated Agriculture Research and Extension Center and one from the Mount Vernon center.

Gillreath-Brown said researchers at the research and extension centers tend to get overlooked. Finding affordable health care options is one of the issues that researchers from the WSU-Mount Vernon Northwestern Research Center have.

“We’re lucky … because we have Cougar Health Services, and our deductibles [are] lower than if you go off campus with our graduate insurance,” he said.

Munroe said the Mount Vernon representative wanted to make sure the state legislature is aware of resource and access limitations they have. Access to health care and behavioral services are difficult and less reliable to obtain near the Mount Vernon center.

“[It’s] a part of this broader approach to helping students be more holistically healthy,” Munroe said, “which then, in turn, gives them a better shot of being mentally healthy as well.”

Gillreath-Brown said GPSA visited research and extension centers to connect with people and make sure they are well represented. He said a lot of the bills the state passes are usually undergraduate-focused.

Munroe said supporting graduate and professional students financially and finding ways to reduce the burden of student debt is another topic they focused on. Gillreath-Brown said he could relate to this due to prior experience as an undergraduate.

“I have a lot from undergrad,” Gillreath-Brown said. “It’s a huge issue.”

Munroe said Senate Bill 5774 is one of the bills they are focusing on. The proposal in the bill is to move student loan acquisition away from private lenders to a different lender that has a better repayment structure.

He said attending Coug Day at the Capitol is a way to remind legislatures that graduate and professional students exist. This event also helps spark discussions and build relationships with senators and representatives, as well as train more effective student advocates.

“In future years, even if they don’t go into politics, they have a little bit more familiarity with having these kinds of discussions around public policy and issues that affect them,” Munroe said.