Satire: Use unconventional tricks to stay healthy this winter 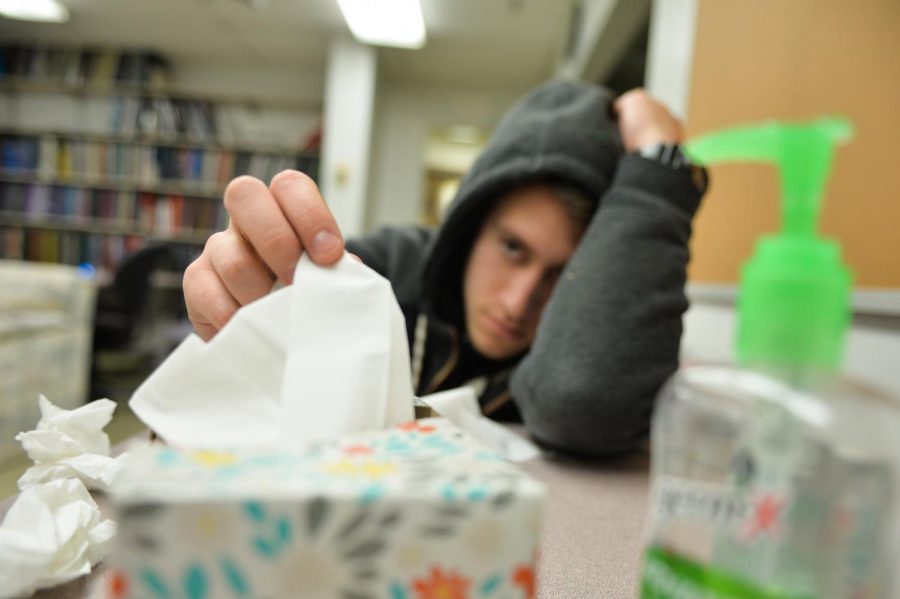 Be sure to attend classes even if you are sick. Spray Lysol vigorously and keep other students away by blowing your nose loudly to make your germy presence known.

Though the groundhog predicted an early spring, winter sicknesses can still invade and make the life of any student miserable. Common cold, flu, measles — in Washington, there’s a season for everything.

Fortunately, experts have compiled a list of ways to stay healthy and prevent the spread of disease on campus. It’s important to make it to every single day of class, so these tips are designed to keep students up and running, no matter what.

Pack your holsters with cans of Lysol

If there’s any way to avoid getting sick, it’s chemicals. Unscented works fine, but Dr. Carrie Bennett, who works at the South Fork Clinic in downtown Pullman, said the stronger scents are better at protecting against germs.

“If the antibacterial properties of the spray don’t kill them, the smell will,” Bennett said.

If your eyes aren’t watering, Bennett said, it’s not enough. The scent should be strong enough to cover up the smell of Old Spice from one of those guys who somehow ends up next to you in every single class.

Furthermore, she said, there’s no need to worry about agitating asthma symptoms or allergies of a fellow student. The next step will help them out.

Now that the air is saturated to toxic levels with Lysol, it’s time to strap on a paper mask and brave the smog.

“You might want to wear goggles and a hazmat suit, too,” Bennett said. “After all, the Lysol still misses 0.1 percent of all germs. It also may cause blistering to the skin during extended exposure.”

Junior nursing major Hal Brighton has worn a surgical mask since he got mononucleosis as a senior in high school. He said since then, he’s only been sick once or twice a year.

“That may sound like a lot at first, but just think,” he said, “if I hadn’t been wearing the mask, imagine how many more times I would have gotten sick.”

Brighton said wearing a surgical mask means he doesn’t have to go through the more tedious steps of wellness — getting sleep, eating healthy or any other practices that require commitment and effort.

He said whenever he has to remove the mask to eat or drink, he makes sure to take as many vitamin C tablets as the bottle recommends to chase down any germs he might have inhaled.

If a student douses himself and his surroundings in Lysol, covers himself head to toe in protective material and still gets sick, it’s probably his own fault.

“Sometimes a student comes into the clinic asking why they got sick even after following the recommended procedures,” Bennett said. “If we ask them, usually we find out the student removed their mask at some point to ease the inevitable chafing behind the ears. That’s a costly rookie mistake.”

Bennett said the best thing to do is keep going to classes. A study she conducted in 2014 showed that doing this struck paranoia in the minds of the other students and often kept them from making the same mistakes as “Patient Zero.”

The very last step is to stay home and skip classes, but Brighton doesn’t recommend it.

“The only time to stay home is if you’re already on your deathbed,” Brighton said. “Otherwise, you risk missing a pop quiz. Do you think your organic chemistry professor is going to let you make that up? Yeah, right — good luck getting into grad school with that mentality.”