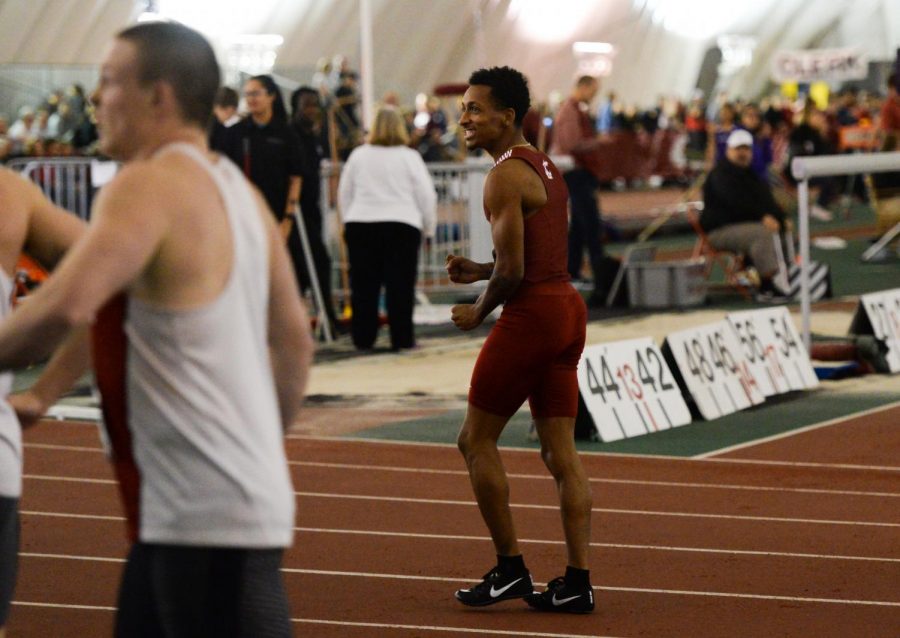 Junior Emmanuel Wells Jr. celebrates while looking up at the results board after sprinting a 6.69 second 60-meter dash to win the event, at the WSU Indoor meet Jan. 19 in the Indoor Practice Facility.

Call him the crimson speedster or a real roadrunner, junior track athlete Emmanuel Wells Jr. has trails of flame with his record speeds.

With a new year comes new records to break. Wells made viewers go wide-eyed and whistle at the Bronco invite in Nampa, Idaho. There, he won the 200-meter dash and the 60-meter dash at 6.72 seconds, which marked him at the seventh fastest 60-meter time in school history.

Only one week later, Wells set even more records for the Cougars at the 17th annual WSU Indoor meet. Running faster still and keeping pace with the wind, Wills ran a 6.69 second 60-meter dash and set the WSU Indoor meet record.

While on the road at the New Mexico Team Invitational, Wells ran a mad dash for a new and improved 6.67 second record, .05 seconds faster than at the Bronco Invite.

This new 60-meter dash time moved Wells from his recently crowned seventh fastest time in school history to being tied with previous Cougar Anthony Buchanan for fourth in the fastest margin for the Cougars.

A record breaking trend wouldn’t end and, like an infomercial, Wells was following up with wait-there’s-more.

At the Cougars’ most recent Indoor meet Saturday, Wells was gone with the wind and broke his previous indoor record of 6.69 seconds and tied for third in the WSU men’s Indoor 60-meter record at 6.65 seconds.

With many more months of track and field left in the year, there’s plenty of opportunities for this star to rise higher and move past others records. The success Wells has brought to the Cougar team leads him to be this week’s Evergreen Athlete of the Week.