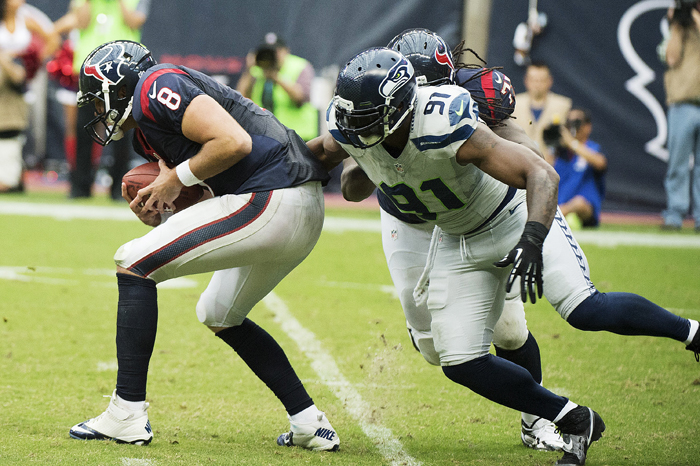 Chris Clemons recorded 4.5 sacks for Seattle in the 2013 season.

The playoff slate for the weekend is shaping up to be one of the most intriguing and evenly matched Conference Championship Sundays in recent history.  Each contest will be a battle of the teams with the two best records in their respective conferences, and each matchup has two of the NFL’s best rivalries.  Division rivals Seattle Seahawks and the San Francisco 49ers will duke it out in the NFC, and of course the AFC Championship is yet another installment of the Manning versus Brady bowl.

However, the NFC match-up is the focus here. The Pacific Northwest’s beloved Seattle Seahawks are on the brink of the franchise’s second Super Bowl berth in team history.  While Seattle has home-field advantage in this matchup, which is arguably the best home field advantage in football, the task of playing possibly the hottest team in the NFL is no walk in the park.

The 49ers won their final six regular season games and have racked up another two wins in the playoffs. This type of pattern is a familiar one for recent Super Bowl Champions, such as last year’s Baltimore Ravens and the 2010 Green Bay Packers.

Another common denominator is the great play from both quarterbacks late in the season as wel as the playoffs. San Francisco’s Colin Kaepernick is no exception.  Shutting down Kaepernick will be the key to a Seattle victory this Sunday, and that task ultimately comes down to the men in the trenches on the Seahawks’ defensive line.

Kaepernick is an unorthodox quarterback with freakish athleticism and top-end speed.  Ultimately, it has been his legs that have made the big plays that led the team to success over the last two months. His ability to run out of the pocket and pick up big gains on the ground has opened up the 49ers running game and aerial attack.

A perfect example of this the wild card matchup against the Green Bay Packers, where Kaepernick ran for 98 yards on seven carries, including a couple key scrambles on the final drive of the game.  Against the Panthers in the Divisional round, Kaepernick did not rack up a ton of yards, but he did score the game’s only rushing touchdown en route to the victory.

To stop Kaepernick, Seattle’s front four will need to contain him and force him to stand tall in the pocket and beat them through the air.  To do this, they should take a page out of the St. Louis Rams’ playbook against the Seahawks in St. Louis earlier this year, when the Rams’ defensive line contained Russell Wilson and nearly upset the Seahawks on Monday night football.

Many great pass rushing defenses have thrived on the edges, having fast defensive ends that can get around the slower tackles on the edge and get to the quarterback from behind.  However, this plays right into the hands mobile quarterbacks such as Kaepernick or Wilson, who can quickly step up in the pocket, extend plays, and run for big gains between the tackle and guard.

The defensive ends will need to set an edge and stay conservative, not allow running lanes, keep the quarterback trapped inside his wall of offensive linemen, and squeeze the pocket down from the inside.

Kaepernick will have more time in the pocket to throw the ball, but the defense eliminates the threat of the run, and especially if they stay disciplined.  This will force Kaepernick to throw the ball down field, and with a completion percentage of just 53.4 thus far in the playoffs, the often inaccurate Kaepernick is bound to make mistakes against the best secondary in the NFL.

The Seattle Seahawks led the NFL in interceptions during the regular season with 28 and sported the second best red zone defense in the league, allowing a large amount of yardage is OK because the big plays on defense will eventually be there. And of course on third and long, unleashing speed rushers, such as Cliff Avril and Chris Clemons, is always a valuable weapon to hold in the defense’s back pocket.