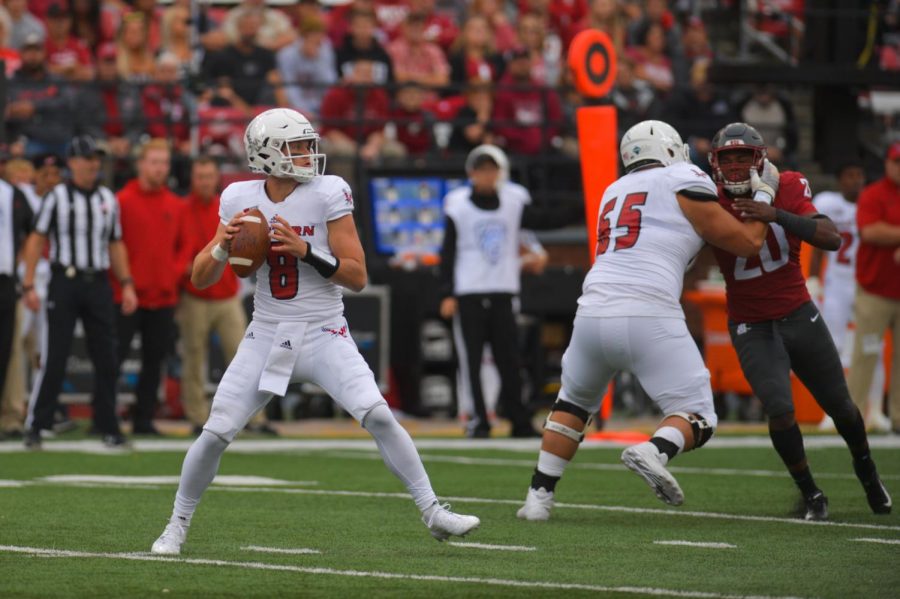 Eastern Washington redshirt senior quarterback Gage Gubrud looks for an open receiver downfield during a game between WSU and EWU on Sept. 15 at Martin Stadium.

Eastern Washington quarterback Gabe Gubrud was denied a medical redshirt by the NCAA, according to The Spokesman Review.

This would prevent Gubrud from earning a sixth-year of eligibility to transfer to WSU and play in Pullman next season. He plans on appealing the NCAA’s decision, according to the Spokesman.

On Jan. 27, Gubrud decided WSU was his preferred transfer destination if he was able to earn a medical redshirt.

To qualify for a medical redshirt, an athlete must play in one-third or fewer of his team’s games during a season. EWU played 15 games this past year and Gubrud suffered a season-ending toe injury Sept. 29 against Montana State, forcing him to miss the Eagles final 10 contests. This means Gubrud appeared in one-third of EWU’s games.

In order to earn a sixth-year of eligibility, Gubrud needed to show that he missed most or all of two seasons due to an injury or hardship. He may have been denied a medical redshirt because he wasn’t able to prove he sustained another long-term injury at EWU.

Gubrud redshirted in 2014 before turning heads over his next four years. If Gubrud doesn’t take the field again, he will finish his career with 9,984 passing yards, 87 passing touchdowns and 753 completions.

Until the ruling on the appeal is made, it looks like WSU fans will have to wait to get more clarity on the quarterback battle next season.