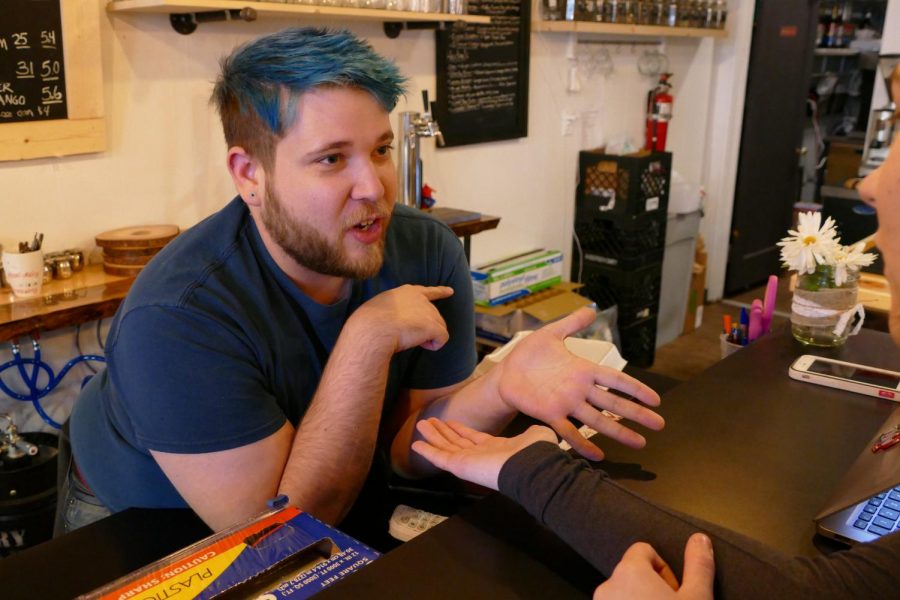 Steven Mislosky, Pups and Cups General Manager, shares his views on spirituality and tells his story Tuesday evening at Pups and Cups.

Pups and Cups is a cafe for humans and dogs, but its general manager, Steven Mislosky, runs a little-known side business. Mislosky is a Reiki healer and tarot reader, and I suggest you give it a try.

Mislosky said he uses Reiki, a no-touching aura massage, to spread good energy to the body, even from a distance.

“I use Reiki on my mom back in Ohio because she has bad knees,” Mislosky said. “I also use Reiki on this girl that receives pain through physical touch — the first time I used Reiki on her, she cried because she finally didn’t feel pain.”

Mislosky grew up in Cleveland, Ohio, and moved around since he was young.

“I grew up in a trailer park,” he said. “It had the best sense of community.”

Over the course of 31 years, Mislosky worked in 33 places. He came to WSU after he worked three jobs and finished his Associated Degree in Ohio. Mislosky majored in Wildlife Ecology and minored in Forestry.

“I came here because it was the top 10 schools in the nation for my major,” Mislosky said.

Even thoughMislosky said he was in a wanderlust state growing up, he was also always spiritual.

Mislosky practiced his Reiki on me and then gave a tarot card reading. When he read my tarot cards, he had me put my hands out to choose which deck I wanted to use. I closed my eyes and chose one.

“My cards tell you what you need to hear, ” Mislosky said. “Not what you want to hear.”

We picked five out of the deck, due to my horrible shuffling. The cards that fall out during the shuffling, go into the reading.

I received cards that told me that I am not a party girl, that my friends are changing my choices in life, and that I am at a fork in the road. The cards were also inverted, which is interesting because they aren’t normally read inverted, Mislosky said.

As for Reiki, Mislosky said to just close my eyes and have an open mind. He immediately put hands on my head, and I felt at ease.

After the session, I felt relaxed and at peace.

Mislosky said to keep an open mind when it comes to the elements of life, including spirituality. He is doing readings and Reiki practices at Sam’s Apothecary at 330 E Main St STE A.