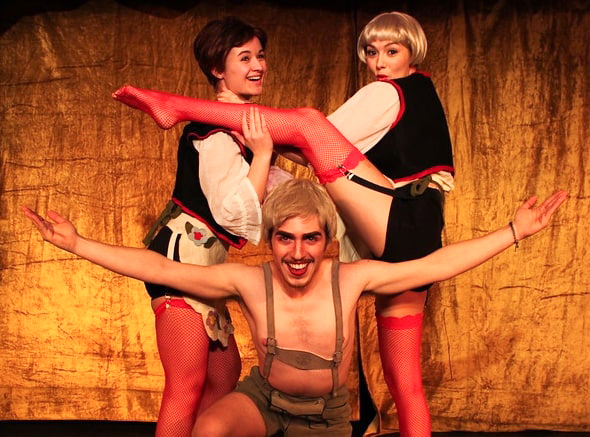 The Regional Theatre of the Palouse (RTOP), located in downtown Pullman, will be performing the musical “Cabaret” starting Valentine’s Day.

“[‘Cabaret’ is a] really showy, edgy, thought-provoking theater piece … it was kind of a no-brainer,” said Michael Todd, associate director of RTOP.

“Cabaret” is a musical drama set in Germany at the end of the 1920s. The story centers on the relationship between patron and employee of the Kit Kat Klub: Cliff Bradshaw, an American writer, and Sally Bowles, an English cabaret performer.

The musical also goes through the romance and relationship of German boarding house owner Fraulein Schneider and Jewish fruit vendor, Herr Schultz, who make an unlikely pair at the time of an ethnicity-based Nazi policy that would mire Germany in the coming years.

The Kit Kat Klub, where Sally Bowles works, serves as a respite from the growing tension caused by the ending of World War I and a growing Nazi presence in the German government.

“It encourages audiences to be thinking of that time in pre-World War II Germany, and how those circumstances can continue in any decade or any area,” Todd said. “It allows audiences to think: how are they involved?”

The movie spotlights the dark themes native Berliners had to deal with through numerous musical numbers offering commentary on the situation in Germany.

Based partially off real-life events, the play was written based on John Van Druten’s 1951 play “I Am a Camera,” and the short novel “Goodbye to Berlin” by Christopher Isherwood.

“It is easy to be silent and it is easy to not stand up for people and just go with the flow,” Todd said. “ ‘Cabaret’ gives audiences an opportunity to access where they are at.”