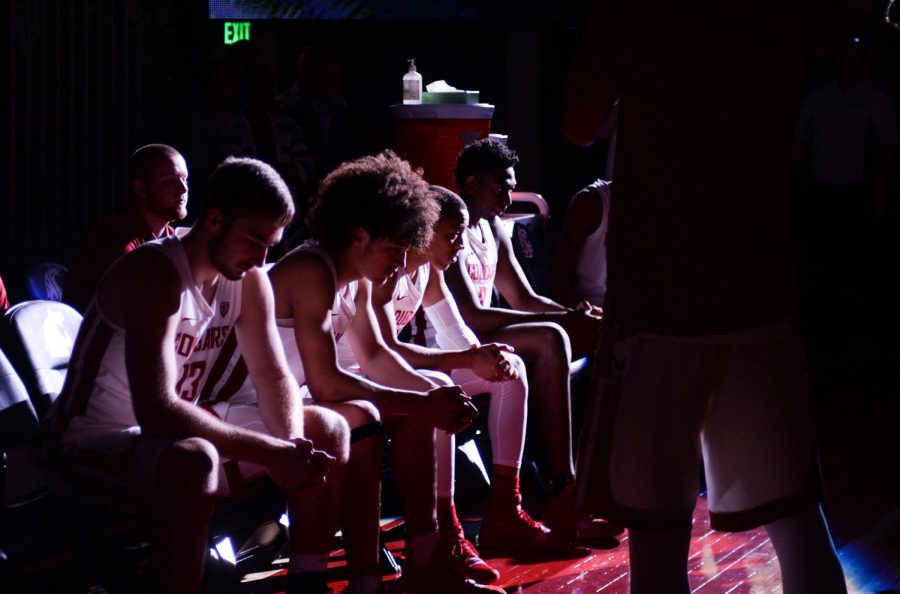 The starters for Saturday evening’s game sit on the edge of the court before they are announced before the game against USC at Beasley Coliseum. WSU will travel to Arizona for their next two contests.

This Thursday and Saturday, the WSU men’s basketball team will begin a short two-game road trip to face off against a pair of Arizona teams.

The Cougars will look to snap a five game losing streak as they take on Arizona State on Thursday. However, this is a tough test for WSU as the Sun Devils (15-6, 6-3) are currently second place in the Pac-12.

Head Coach Ernie Kent said he believes his players are starting to pick up the way they play and they will be dangerous when the majority of the team is on its game.

“Consistency is key,” Kent said. “Everyone knows what Robert Franks is capable of doing. When we are all on our game, we’re a very difficult team to handle.”

Lack of consistency has definitely been the Cougars’ problem this year and the past few seasons. WSU started off 7-6 before the new year. Since then, they have won just one of their last 12 and are 1-8 in conference play.

The Sun Devils won’t be the Cougars’ only challenge, as they will face off against Arizona on Saturday.

Despite falling somewhat below expectations this season, the Wildcats have a 10-2 record at home and are one of the most challenging places to play in the nation due to the atmosphere the fans bring every game.

Kent said playing solid defense will be important but inconsistency continues to be the problem for his team.

“Our ability to guard, defend and the things we do to keep teams off balance is very successful when we are consistent,” Kent said. “The problem is that we haven’t figured out how to be consistent.”

Though senior forward Robert Franks and freshman forward CJ Elleby have been dominant on both ends of the court, they still remain the only two scorers averaging double figures for WSU. Currently, ASU has five players who average double digits with a strong bench while Arizona has three people in the double digits with some depth as well.

Defense will obviously be the main focal point for the Cougars in order to pick up their first road win of conference play. However, these two teams definitely pose their own unique challenges.

Kent said his team is getting blistered by players driving down the lane and if they can prevent stops down below they can get a couple of wins this road series.

“Games really center around the defensive end of the floor,” Kent said. “When we don’t rebound they get open shots around the perimeter and when we take bad shots we give up easy buckets. We need to stop that.”

WSU’s Thursday game against ASU will be on the Pac-12 Network with tip off starting at 5 p.m.

This story has been updated to reflect the correct time of the game against Arizona State at 5 p.m. Thursday.