Competitors use a variety of mediums to express messages about natural beauty, growth, resilience 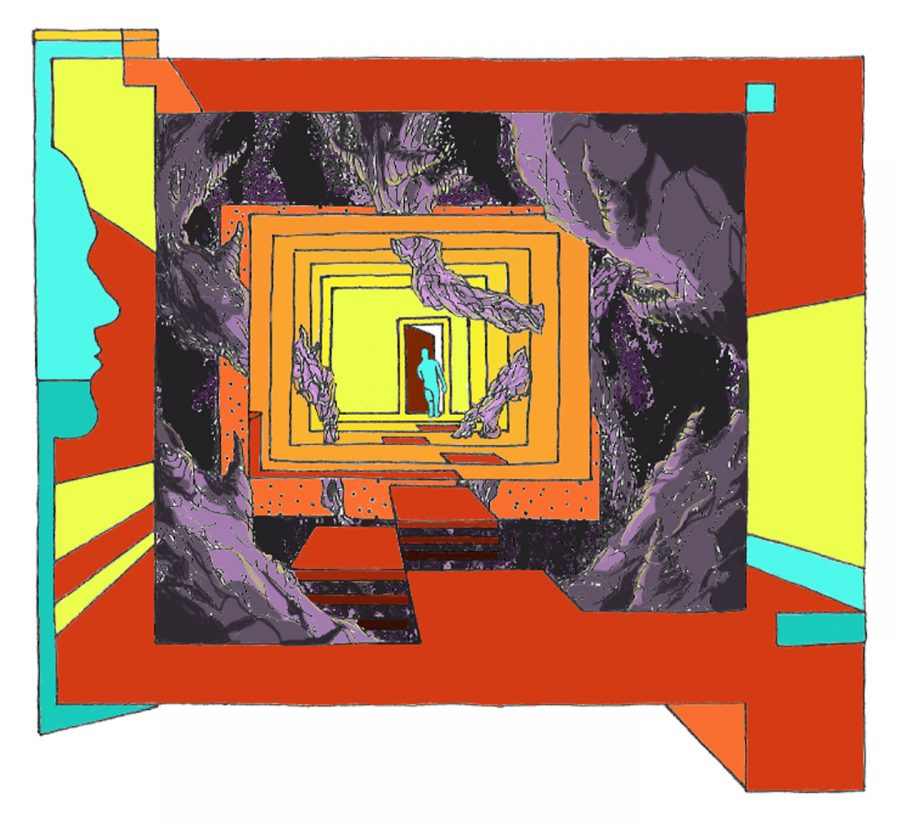 “I tried drawing in a very jagged, uninviting abyss that breaks up this path,” WSU junior Nicholas Lopes said about his piece “Resilience.”

The Student Entertainment Board opened an art exhibit Wednesday featuring ten finalists of the Beauty in Strange Places competition.

Student spectators were welcome to free snacks throughout the day and had the opportunity to vote for three winners of the competition, who will receive $1,000, $500 and $250 scholarships respectively.

Finalist Nicholas Lopes, a junior at WSU studying interior design, displayed his piece “Resilience.” He said he hoped he made a strong enough impression to win one of the prizes, but he was impressed by the other artists’ work.

“Seeing what they posted really made me nervous scholarship-wise,” Lopes said. “But it was great to see other people doing what they love, and that being posted for others to see.”

The contest featured photographs, paintings, digital art and a dress made with halved Busch Light cans.

Lopes said it might not be fair to compare different mediums in one competition. Someone could relate to three-dimensional art more than his 2D illustration, but as a spectator, he was glad to see variety.

Jasmine Wang, WSU freshman studying hospitality business management, said she came to the event after noticing a flyer on the way to her dorm. She said she had trouble picking a winner out of all the artwork.

“After I was done with all the pieces, I looked back around and it’s like, ‘Wow I like every single one,’ ” Wang said.

Wang moved between the art on display, evaluating them all before choosing a winner.

Wang said it was easy  for her to appreciate “Blood Orange” by Kathryn Riendeau, a painting of an orange slice held up to a light. Wang said her love for food connects to her major.

“It is fascinating and humbling to dig deeper,” Reindeau wrote in her description of “Blood Orange.” “And realize the inherent beauty of the world exists on every level.”

Wang also debated between “A Sight for Sori” by Sylena Harper, a photograph of a fungi under a microscope, and “Union Pacific” by Trevor Kvinsland, a drawing of an old train sitting on rusty tracks. She said she also loved ‘Remnants of the Past’ by Luke Lobdell, a photograph of an abandoned building with light shining through holes.

Wang said she still needed more time to properly rate the art before making a decision, but said she was especially impressed with Lopes’ piece.

“I would hang it in my room if I could buy it,” Wang said. “I just empathize with it.”

Lopes said he didn’t plan to display his illustration for the public. He intended to give his illustration to a close friend who had experienced several losses in their life. Lopes was inspired by his friend’s ability to keep their negativity from expanding.

“I decided to make the piece largely about how they’ve handled loss in their life,” Lopes said. “It will always stick around, but they’re the kind of person that keeps moving forward.”

The illustration itself shows a simple one-point perspective of a person walking on jagged, broken path with a dark abyss surrounding the edges of picture. Lopes said he tried to represent the difficulty of staying positive while facing great adversity.

He said he worked on the piece on and off for four days.

“The first day I did a lot of sketching how I wanted it to look and feel and then making sense of the concept of dealing with loss,” he said. “The three days after were refining those ideas.”

Lopes said he wanted to keep the description vague and abstract to make it more relatable for more people, and to protect his friend’s privacy.

Lopes won’t know whether he won scholarship money until Feb. 15 but he said he thought the exhibition was great regardless.

“I haven’t been as connected to the visual art community in Pullman as much as I’d like to be,” Lopes said. “It was great to go and look around. I hope this was as successful as [SEB organizers] were hoping it would be.”