One student featured quinoa, how it can take place of meat, wheat 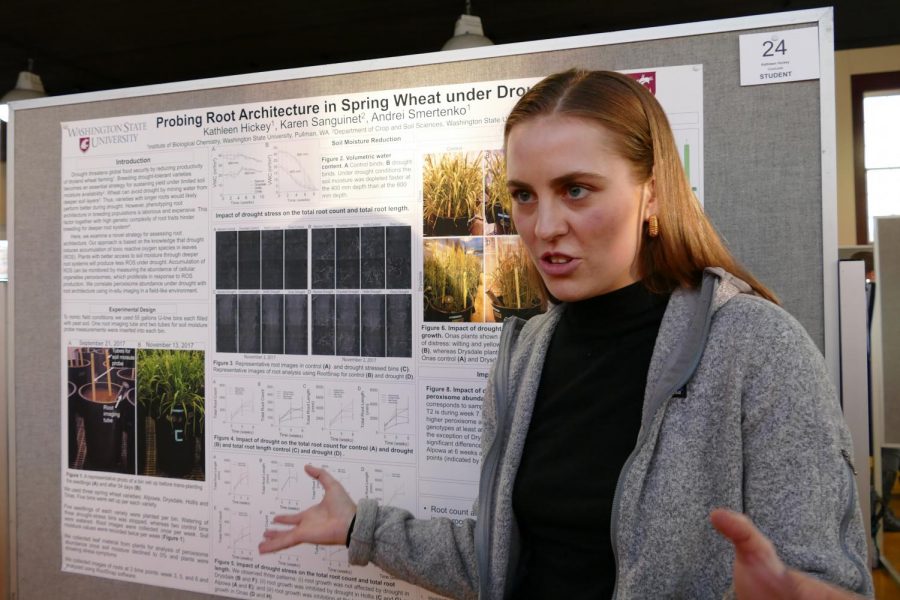 Students and professors presented posters featuring agricultural projects during the BIOAg Symposium in the Ensminger Pavilion on Thursday.

Kruger said the program includes conservation agriculture improvements such as pest management systems and increasing the nutritional quality of foods.

He said the symposium itinerary included poster presentations and a panel of guest speakers from the College of Agricultural, Human, and Natural Resource Sciences and the Elson S. Floyd College of Medicine. The panel discussed potential research collaborations between food and human health and agricultural crop production.

The agriculture poster projects were presented by students and professors who had received research and educational grants in the last few years, Kruger said. The students and teachers presented their hypotheses and latest findings.

Halle Choi, master’s student in the sustainable seed systems lab, featured quinoa as the focus of her research. Choi said quinoa is a plant-based protein used as a sustainable replacement for meat.

She said wheat is one the biggest commodities produced in the county. Her studies include looking for different ways people can eat the quinoa in place of products such as meat and wheat.

“One of the first things you [have to do] when you are trying to convince the public to eat healthy food is to find food that they like,” Choi said.

Choi said she has experimented using quinoa flour in place of wheat flours to make bread and bread-based products such as pancakes. She used two types of quinoa grains for her experiment: antique white and tricolor.

“The antique white is much more mild in flavor and the consumers like this variety best,” Choi said. “Tricolor is too bitter for people to really enjoy without some kind of pairing.”

She said the use of antique white grain was favored when used in pancakes. Tricolor fermented breads were popular in her test, especially when paired with a sweet cheese.

Choi said she received a grant from the National Institute of Food and Agriculture. Additional funding for her research was provided by WSU.

Choi’s research also focused on the consistency of quinoa texture in different foods. She found most consumers were unable to notice a difference in the texture of a quinoa-based pancake than a wheat-based pancake.

“I’m here to get the word out about quinoa and let people know what the seed looks like,” she said, “to show what the plant looks like and let the people know [that it] is more than just a boil or steam product like rice.”

Kruger said the BIOAg department announced a request for proposals around September, and they had to be submitted before winter break. Department heads and agriculture stakeholders reviewed the submissions and will announce the grant winners two to four weeks after the symposium.

Although the number of submitted proposals has a wide range, there are usually around five to 10 winners in every cycle, he said.

Kathleen Hickey, first-year graduate student in the molecular and plant science program, said her project focused on drought tolerance mechanisms of wheat. She said she wanted to understand how different types of wheat grown in the Palouse survived in dry periods.

Hickey said she used a camera that enabled her to take pictures of wheat roots under the soil. One of the wheat root varieties observed continued growing under drought conditions and the other variety stopped root growth and instead focused on cellular protection, she said.

Hickey received a BIOAg grant and continued her research through 2017.

Kruger said grants offer up to $42,000 for agricultural research and materials.

“We try to fund the start of the project that they can then gather preliminary data,” Kruger said. “We can help teachers and students get more research and education opportunities going around sustainable agriculture.”